To say that Adobe’s Audition is a staple of radio production would be an understatement. Audition has been a favorite since it was Cool Edit and Cool Edit Pro, and we’ve looked at that product several times in its various incarnations. Adobe has continued developing Audition, and released Audition version 3 in mid-November 2007. While it’s not groundbreaking, Audition 3 offers a group of useful new features that will be greatly appreciated by production folks, at less than a hundred bucks for the upgrade.

I’ve been using Audition 1.5 since Adobe released it, and did not install version 2 because it required Windows XP with Service Pack 2, and I was still using Windows 2000. So it’s high time I got with the program, don’t you think? Let’s take a look. 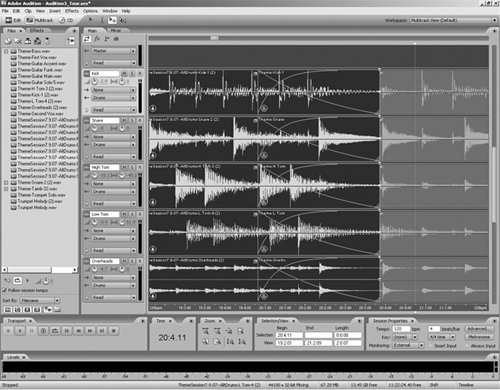 The version 3 installation process works like previous versions, and I encountered nothing out of the ordinary. If you’re upgrading from version 1.0, 1.5, or 2.0 and you don’t have the old copy installed, be prepared to enter the serial number of the old version during the install process (when you do, you’ll get a very small dialog box that just says “Upgrade” and has an OK button. That made me laugh). After you install it, you have 30 days to use the product before you must activate it. It was here that I found the only weirdness — when I tried to decline activation because I’m not sure about on which machine I want it to live, it told me that my 30-day period had expired, then went on to launch anyway. Go figure.

Audition needs about 750MB of disk space for the basic program. It comes with about five gigabytes of audio loops, marketed as Loopology, which I did not install. It still requires XP with Service Pack 2 in either the Home or Pro version, and while Audition remains a 32-bit application, it runs in Vista’s 64-bit environment. Adobe recommends a minimum 1.4GHz Pentium 4 processor, but if you want high performance you’ll need a 2.8 or 3GHz Pentium or perhaps a Dual Core processor and a couple of gigabytes of RAM. Those of you with Dual Core boxes will be glad to know that Audition likes multiple processors, and will use all the cores you have available for better performance. As with previous versions, Audition 3 handles every audio file format you might ever want to edit, including such oddballs as Amiga (.iff) and Dialogic VOX (.vox), and more standard formats including Windows Media.

I should also mention that I installed Audition on two computers (Adobe does let you do that, so long as you’re only using one at a time.) In addition to installing it on a Windows XP PeeCee, I also installed it on my MacBook Pro which has Windows XP SP2 running under the Parallels software program. For those of you who have Intel-based Macintosh computers, I can tell you that Audition runs just fine, although I have yet to get the ASIO drivers for any of my interfaces working with XP under Parallels. I’ll let you know when I do, but meanwhile Audition is happily talking to the MBP’s built-in audio in and out, and the latency is tolerable. The performance is not quite up to that of my Pentium 4 machine, but I’ve recorded and edited complete eight track promos with it, and even ran a few real-time plugs. It’s okey-dokey.