Production 212: Impressionism Mechanism (How To Become A Dutch Master… NOT A Cigar)

For some of you dear readers, this column will be a bit of déjà vu all over again. LOL – I keep comparing what we do to art and how we can step up our skills to become Masters. Last month I told you to never underestimate the audience. This month I want to remind you that, like art, radio production is a mental thing, even though we strive to make it emotional. The emotion you feel when you stand next to Michelangelo’s David or gaze at Rembrandt’s Danea, is what makes these pieces communicate and gosh… I’m pretty sure that’s what we’re trying to do aurally. You might not see the immediate relevance of a bit of art history has to radio production, but it’s an important allegory to what we do, so stick with me, please. 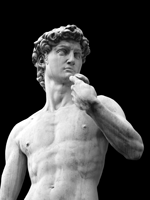 Michelangelo, Rembrandt, Van Gogh, Renoir and Picasso are all names you are familiar with, even if you’re not a connoisseur of fine art. Truth be told, I’m sure many of us would be hard pressed to identify any of their more famous pieces as being theirs, with few exceptions. All of these artists had a major impact on the world of art, some leading entire movements within the art community and some defining what contemporary art of their day was.

Pierre Auguste Renoir (1841-1919) rose to fame in the late 19th century as the leader of Impressionism. He and Claude Monet worked together during the late 1860s, painting similar scenes of popular French river resorts and the burgeoning middle class of Paris. Renoir’s true claim to fame is his skill at capturing the mood and emotion of his painted subjects. I use the present tense because his work is still regarded as the high-water mark of skill at capturing the human form with all the emotional baggage intact, on display, for all to feel.

Art critics of Renoir’s day had some rather pointed views about the origin of any given artist’s skills. Distinguished scholars delivered long papers about Monet, Renoir, Cezanne, Degas and Pissarro, debating how each of these successful impressionists delivered such strong emotion and vitality to the viewer. Some claimed they all had extra nerve endings in their fingertips. While others thought the artist’s palette was the key, mixing colors before they ever touched canvas. But Renoir never mixed his colors on the palette, keeping it clean, grabbing what color he needed and mixing it on the canvas itself.

As far as having extra nerve endings in his fingers goes, in his later years from 1912 to 1919, Renoir became even more famous as his work took on a brightness and warmth that exuded a certain joy for life. It matched his own joie de vivre for even in his ‘70s, he maintained a simple, yet happy lifestyle, preferring flannel shirts because they were comfortable, eating simply, but often and always enjoying the company of women, many of whom were very much younger. It was in 1912 that Renoir was stricken with crippling arthritis. Any of you whose parents or grandparents suffered from this know how incredibly debilitating it can be. The whole argument that perhaps he and others had extra nerve endings in their fingertips was completely debunked, as he had to tie a paintbrush to his gnarled, useless claw of a hand to continue painting for the next seven years.

Renoir always maintained that the secret to great art was in the eye; having the ability to see those emotions first, and then transfer them to the canvas on the easel.

OK, we’re not making paintings or sculpture, but we are dealing with emotions. If your work has no emotional appeal, it will have zero impact on the listener. Pick any emotion, love, hate, fear, happiness, dread or sheer joy… these are the tokens of exchange we use to interact with our audience. We may want them to react intellectually, by making a choice to listen to our station, but they make that choice based on how we make them feel. We may want them to buy a product from our sponsor, but if they have no sense of what it will do for them, on an emotional level, they’ll never even consider it. Remember that our audience has a million other things going on in their lives, and we’re trying to get their attention long enough to deliver a message. The only way you can wedge that door open is with emotions.

I recently got an email from a producer in Denver who had read one of these columns with tips on how to make a PHAT VO. He thanked me for the column and explained that “Except for a few pointers from some cool people, I’ve just figured out pretty much everything on my own, but wouldn’t be able to explain how it really ‘works’ or what amount of compression or how much db or hz I’m supposed to use for... well for whatever I’m making that day.”

I responded by pointing out that this describes me perfectly as I came up on the production side of the radio biz. Honestly, when I was just starting out, I didn’t know what compression, EQ or even limiting was and would be hard pressed to explain to someone else what I was doing. I just kept fiddling with the knobs until it sounded like what was in my head. My secret to great production is exactly like Renoir’s, with certain words changed: The secret to great production is in the ear; having the ability to hear those emotions first, and then transfer them to the track on your machine.

Easier said than done? Maybe. It’s actually very hard to make a promo or commercial without emotions of some sort, but while most of the work I hear these days has emotion in it, the feelings are mixed or not clear. My audio on this month’s CD is all about joy: the sheer joy of winning… the joy of giving… the joy of music. It’s a promo for the Z100 Pays Your Bills contest. So, all right… a winner promo for a contest is almost always going to be filled with joy, but I think this one just oozes joy from the winners to the jocks to the music playing behind. Nothing is wasted. Nothing points the wrong way.

The next time you sit down to produce a commercial or promo, before you fire up a session, start pulling music and effects or anything else, think about what you want the over-riding emotion to be. Hear it in your head before you do anything else. Then, as you start the process, make sure that everything you’re importing to your session fits that emotion. Then… fiddle with it.

Next month, I’ll jump into the science side again and try to explain how to make the music fit the emotion of the words —  in other words, how to fiddle with the music. Clearly, you’ll have to start with the right piece of music, but unless it was composed specifically for your promo or commercial, getting the music to go and pause in all the right places is the hard part. I’ll talk about phrasing (in music) to match your verbiage, which I guarantee will double or even triple the impact of your work.

Test Drive: The Orban DSP FX Engine For The DSE-7000

December 01, 1996 7324
by Jerry Vigil This month's Test Drive takes a look at a digital multi-effects processor, but this is not your typical effects unit. The DSP FX Engine does not come in a rack-mountable box, and it only works when plugged in to...
Read More...
© 1988 - 2022 Radio And Production, LLC
Go to Top