Next comes the speaker module, which is clearly the heart of Speakerphone. The icons on either side of the picture organize the speakers into categories, and clicking on the picture in the center brings up a list of speakers within that category. These guys missed very little -- there are close to two hundred different speakers modeled here, including some with multiple mic placements to choose from. Amplifiers and cabinets; old, new, and cellular telephones; gramophones and record players; old and new radios of various sizes including a couple in cars, laptop and desktop computers; headphones and earbuds (with and without leakage); plastic toys; and answering machines. And they're accurate -- when I saw they'd modeled a Macintosh SE30 (circa 1990 and 8-bit), I compared it to the real thing. Yes I still own one, it works, and Speakerphone is spot on. Do you still have that three-inch-high Marshall stack on your desk? They did that one too.

Speakerphone will treat a stereo input as two separate signals, and will process each separately. If the speaker is in mono mode it will be summed as well as processed. In addition, you can choose to have the subsequent effects applied pre- or post-speaker, which is to say you can distort the speaker's sound or feed a distorted sound into the speaker. 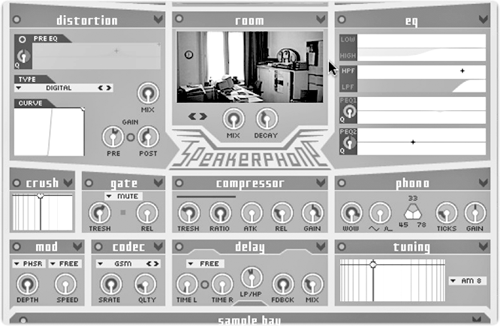 First up after the input stage is Phono, which simulates a gramophone effect with convincing Wow, Curve (as if playing a "bumpy" record), and Tick effects. Next is Mod, which gives you tremolo (amplitude modulation), chorus, phasing, flanging, and vibrato (pitch modulation). After Mod comes Tuning, which simulates the sidebands and distortion of an off-band AM radio, using a joystick for control. After that is Codec, which simulates a cellular phone's codec. You can change the "sample rate" of the sound as well as the connection quality, including drop-outs.

If your Speaker emulation is set to Pre, then it will be located next in the chain, right after Codec. Your track will then hit Crush, where you can move the joystick down to reduce the bit rate from 32 bits down to 2 bits, or move it left to reduce the sampling rate -- it's nasty. Next comes Compressor, and I can tell you that this puppy is designed to NOT sound like a high-quality compressor. There's lots of radical squash and pumping available here. You can add the next module, Gate, to create drop-outs that work nicely with the Compressor to create some bad cell phone juju. Sweet. Then comes Distortion, and it comes with its own pre-distortion EQ so you can add high frequency content or roll off lows. Distortion types include smooth analog, warm tube, nasty digital clip, and even the sound of a broken cable, complete with hum.

If you've set you Speaker to Post, then its emulation will show up here, after Distortion. This lets you get a nice saturated signal to run through the loudspeaker. Your signal then hits Room, which is a full-blown convolution reverb. Think Altiverb without the controls; your only choices are the Mix levels and the overall Decay time, but there are a couple dozen different room environments into which your virtual speaker can play. Last in the chain is a four-band EQ, with one shelving EQ, one lowpass/highpass filter, and two bands of parametric EQ.

The bottom of Speakerphone's interface is home to the Sample Bay, a collection of samples that will play along with your audio track. These range from background speech to street sounds to sirens and crowd noises. You can simply let them loop in the background, or you can drag individual sounds onto your tracks. You can also drag your own sounds from tracks into the Sample Bay, where they'll loop in play as more background sound. Each column has a Pre/Post button like the Speaker module, and you change the volume of a sample by dragging the end of its name to the left or right.

Many Speakerphone presets use sounds from the Sample Bay to add realism to the speakery environment. They make a huge difference in the level of realism, and save time as they're already done and ready to go.

MOTHER OF ALL PHONE FILTERS

As you can now see, Speakerphone is a phone filter on steroids. In fact, it's a mini-effect factory all by itself. The presets are comprehensive and, most importantly, convincing. My only complaints are with the interface colors and tiny type, and with the fact that Speakerphone doesn't yet work in Wavelab or Audition (although I'm told that it soon will). But I cannot complain about the sound -- it definitely exceeded my expectations.

All this gooey goodness comes at a price, however. At a US retail of $495 (395 Euros) and a US street of $450, Speakerphone is a pricey plug. But I do think that this is a case of getting what you pay for. When you consider that you're also getting a nice convolution reverb and a useful collection of ambience samples along with it, Speakerphone is expensive but worth it. Besides, where else can you play a VO track through the 1952 Fender Deluxe tweed amp used on Elvis' Sun recordings?

Speakerphone from Audio Ease is available now, and carries a US retail price of $495. For more information worldwide, visit www.audioease.com.

Once the impulse response has been isolated, Speakerphone applies it to each sample of your digital audio file as you play it. Each sample acts like an impulse, and the cumulative effect of convolving the impulse response with all those impulses in quick succession re-creates the sound of that signal being played through that loudspeaker.

The convolution calculations are complicated and need a fast processor. In fact, until recently convolution was an entirely off-line and non-real-time process. But CPU chips in computers are now fast enough to perform the calculations involved in convolution in real time. Guess there really is a Santa Claus.

January 01, 1993 22665
by Jerry Vigil It's here. Another recording format. Another replacement for the aging analog cassette. Digital Compact Cassette. There is a ton of money to be made if one can capture the current analog cassette market with a...
Read More...
© 1988 - 2022 Radio And Production, LLC
Go to Top