In the beginning, there was the Yamaha NS-10 studio monitor. With its compact size and white woofer cone, and despite a distinct lack of bass and brittle high-end that required Kleenex over the tweeters — the specific brand of tissue was a hot topic among audio engineers — the NS-10 became a standard for nearfield reference monitors worldwide. But times and tastes changed, and the mid ’90s saw Mackie’s amazing HR824 active nearfield monitors replace the NS-10s as go-to nearfields. Sometime after, Mackie released a smaller version, the HR624, which never reached the popularity of its older sibling but was still very successful. I had a pair of these charmers for several years, and what they lacked in low end compared to 824s, they more than made up for with the same open top end and detailed mids of their big brothers. I mixed countless commercial spots on them, and liked them a lot.

Last year Mackie introduced updated versions of both HR-series speakers, namely the HR824 Mk2, and the HR624 Mk2. These are now joined by lower-cost versions of the 824 and 624 monitors with the new MR8 and MR5, respectively. Given the opportunity to test drive the MR8 and MR5, I also opted to get a pair of the HR824 Mk2’s at the same time, so I could compare red apples to green apples. Got that?

Good, because we’ve come a long way from NS-10s, I can tell you that much. 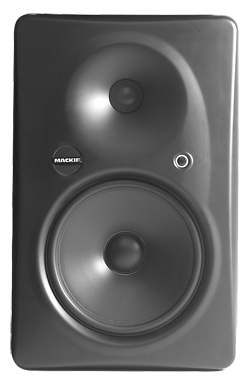 Mackie’s HR series of active two-way studio monitors is one of the company’s biggest successes. Their replacements, the HR824 Mk2 and the HR624 Mk2, show a lot that’s changed on the outside, and a few changes on the inside too. The design team from Mackie’s sister EAW division, best known for their high-end live sound systems, played a significant role in the redesign. Manufacturing is carried out in the Far East, as it is for much of the Mackie product line these days.

Other than in woofer size, power and frequency specifications, both the HR824 Mk2 and HR624 Mk2 models are quite similar. The first thing you’ll notice is the shiny, gloss-black ‘piano’ finish. Another obvious change is that the simple rectangular baffle has been replaced by an aluminum moulding featuring a curved front and radiused corners. These rounded edges reduce diffraction, and the tweeter waveguide is moulded into the baffle so that the flare is completely smooth.

The new cabinet is slightly larger than the original HR box, but the amplifier design is basically the same. Internal bracing is used to make the cabinet more rigid and, as with the older models, the free space is filled with a porous acoustic foam to reduce internal reflections. Also carried over from the previous model is the concept of using a passive radiator (like a flat-cone speaker with no drive coil) at the rear of the cabinet, instead of a tuned port. The radiator acts like the port but has advantages at very low frequencies, where it helps prevent over-limit excursion of the woofer. The radiator is large, at 6 by 12 inches, but it is hidden by the ventilated rear-panel assembly.

The gain and frequency response of the speakers are individually adjusted during the manufacturing QC process, to reduce variations due to component tolerances and therefore achieve better matching between pairs. An individual calibration plot also comes with each speaker, which is reassuring. The low-end performance of the Mk2 is as impressive as the original, with the HR824 Mk2 covering 35Hz to 20kHz (+/-1.5dB). As with the Mk 1 series, electronic overload and short-circuit protection is built-in. 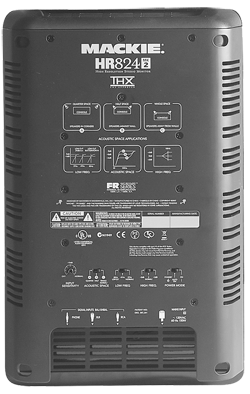 Handling the low-end and mid-range is an 8.75-inch woofer, which has a synthetic cone, a cast-magnesium chassis and a 1.6-inch voice coil.

On the HR624 Mk2, the woofer is a 6.7-inch driver with similar construction. The high frequencies on both are handled by a one-inch, Ferrofluid-cooled, titanium-dome tweeter, in a polymer suspension (don’t ask, but it does sound tasty). In the HR824 Mk2, the low frequency driver is powered by a 150W amplifier and the tweeter amplifier is rated at 100W, while the HR624 is powered by similar amplifiers rated at 100W and 40W respectively. The crossover has a steep 24dB-per-octave slope. The peak SPL per pair specs out at 120 dB peak at one meter for the 824 Mk2, and at 115 dB peak for the 624 Mk2, due to the slightly reduced amplifier power.

Other than the power button, all the controls are on the rear panel.

Input and power connections are under an overhang at the bottom of the metal panel. There’s a choice of RCA phono, balanced quarter-inch jack, or balanced XLR, though you can also connect an unbalanced jack or XLR. A rotary control sets the required input sensitivity, and there is a three-way slide switch to select the mains power setting — Standby, On, or Auto On mode, wherein the amplifiers turn off if no audio is detected for eight minutes, but they wake up if a level in excess of -45dB hits the input. The light ring around the power switch shows the amplifier status.

‘Quarter’ is best for speakers situated near corners, ‘Half’ is for speakers placed close to one wall, and ‘Whole Space’ is best suited to speakers positioned well away from any walls. Mounting right in corners or up against a wall is not recommended anyway, due to the increased bass response you’ll get if you do. There’s also a switch to set the low-end performance, which in the case of the HR824 Mk2 offers an LF roll-off at 80Hz, 47Hz or 37Hz. Where the room is too small or too poorly bass-trapped to work well at very low frequencies, the 47Hz setting is a good option, whereas the 80Hz setting provides a reasonable emulation of the bass response of a small home music system.

December 01, 1997 23865
by Jerry Vigil The abundance of hard disk multitrack recorders on the market today gives the buyer lots of choices, each one having features and functions that set it apart from the rest. The trick is to know what you need in a...
Read More...
© 1988 - 2023 Radio And Production, LLC
Go to Top