I Always Walk Toward The Sun 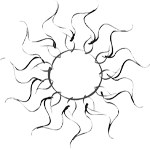 “I always walk toward the sun,” George Patton Minelli would say. The pastor repeated those words at the graveside of Mr. Minelli’s funeral. Mr. Minelli, named by his immigrant father after the American general who led the liberation of Sicily, died at the age of 55 and was buried in the only suit he owned. In the inside pocket of his jacket were two Purple Hearts from his service in Vietnam. The American Legion paid for his gravesite, sent an honor guard with pallbearers, and would later provide a brass marker free of charge. With the thanks of a grateful nation, a representative of the Legion gave me the flag that draped his coffin because I was the only mourner present to receive it.

I met Mr. Minelli one morning on my way to work because I had a flat tire. He was walking by and he offered to help. He was a small man, wearing a dark brown suit with a bolo tie, brown leather cowboy hat over curly grey hair, and a pair of worn white sneakers. Around his neck was a pair of headphones, which were plugged into an old Sony Discman that provided music for him to listen to while he walked. He would later tell me it helped to quite his mind. Mental illness wasn’t a stranger to Mr. Minelli and the constant music helped to drown out the sound inside his head. He also carried a brief case with a page of white paper taped to the side which read “Jesus Saves” written in black magic marker.

I was about to refuse his offer to help until I noticed the most amazing thing about Mr. Minelli, his constant, warm, inviting, reassuring and most of all, sincere smile. It never left his face. He observed that my wheel didn’t have a hubcap so he offered his hat to hold the lug nuts and lifted the spare from the trunk while I worked the wheel. We made small talk and in only a few minutes, the spare replaced the flat. I wiped my hands with a rag to signal the job was done and reached out to shake his hand and introduce myself, “My name is Ed Thompson. I appreciate the help.”

“And I’m George Patton Minelli. Glad to do it,” he replied happily and asked, “On your way to work?”

“Good for you,” he exclaimed, “Just remember, when the bastards try and get you down, always walk toward the sun.” Then he smiled broadly, shook my hand a second time, turned and walked away.

Over the next two months, I would see Mr. Minelli walking down the street and I’d stop to chat. Occasionally we’d share a cup of coffee and I’d listen to him tell short stories of his life, and every time we parted, he would smile and say, “Eddie-boy, always walk toward the sun.”

On a Tuesday morning in June, I didn’t see him walking. Later that afternoon, I was reading the online version of the local paper when I saw his obituary. Mr. Minelli had finished his journey and had arrived at the sun. I smiled, broadly. It seemed the only appropriate thing.

The only thing in the short story about Mr. Minelli that is true is the description of his appearance. Nearly every day when I drive to work in the morning, I see a gentleman who looks exactly like that, walking east down Broadway. On my way home, I see him nearly as often, walking west. Always when I see him, he is walking toward the sun.

Writing can be technical or it can be inspirational. I prefer the latter. Inspirational stories can take you to wonderful places like the Shire, experience unforgettable things like an undersea voyage aboard the Nautilus, and introduce you to fascinating people like the fictional Mr. Minelli. Technical writing is generally laden with tired phrases and clichés. Like most of the commercials we hear, packed with “save like you’ve never saved before”, “prices have never been this low”, or my personal favorite, “for all your ****ing needs”.

But, from where does inspiration come? Short answer. Everywhere. It’s like the Force. It surrounds us. It’s wherever you look.

Many years ago, I read an interesting interview of author Ray Bradbury. He was asked where he got all of his fantastic ideas. Mr. Bradbury replied that his office is packed with clutter, boxes of junk mostly. Models, toys, posters, pictures of various kinds, musical instruments, even an old pair of glasses were scattered about, and when he would reach a point where he couldn’t come up with an story, he would look around him. When something caught his eye, say an old poster for a county fair or circus, it sparked an idea and grew until it became his novel “Something Wicked This Way Comes”. My short story of Mr. Minelli came from nothing more than noticing a slightly unusual man on my morning commute.

Many though, mistake inspiration as something that happens only occasionally. The honest truth is it can happen all the time. How did Ted Williams hit .406 in 1941 and .344 over 19 years in the Majors? How did Stevie Ray Vaughan make a Fender guitar sound like a heartbroken human soul? How did Thomas Alva Edison constantly invent new and better devices that continue to make our lives easier? How do you get to Carnegie Hall? The more one practices inspiration, the more it becomes a working part of the mind. Practice makes the mediocre, good. Practice makes the good, great. Practice makes the great, legends.

So keep looking for your inspiration and don’t forget, always walk toward the sun.