A few weeks ago, I got an email from Terry Trouyet in Baltimore who works at WVIE-AM, asking about compression and equalization. His boss complained that his work had way too much bottom end and that it simply rumbled every time it came on the air. I was a little unsure of the facts because with the exception of the first few months of my career, I’ve always worked on FM. So, I went to an engineering friend whose opinions I trust and asked how compression and EQ affect a station that uses Amplitude Modulation. My, oh my, did I learn a lot. Terry’s problem wasn’t compression at all. It was purely EQ. 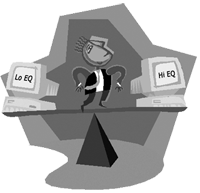 OK, I have to give a bit of a disclaimer here, as I often do. This article is from the world of Dave Foxx. It’s based entirely on my experience as a major market producer for nearly 30 years. But when it comes to equalization, I’m very uncomfortable being quoted as an expert. The more I learn about EQ, the more I realize that I’m still only scratching the surface. Hopefully, this article will help you understand a bit more about equalization. I especially hope that I will learn even more.

First of all, what is EQ? Well, according to the Miriam-Webster online dictionary, to equalize is “to adjust or correct the frequency characteristics of (an electronic signal) by restoring to their original level high frequencies that have been attenuated.” Of course, being the creative types we are, we take things a lot further, sometimes to ridiculous lengths. Once we have a tool that can change things around, we take great delight in seeing what happens when we abuse it.

According to my trusted engineer friend, AM Radio is supposed to pass frequencies from 60Hz to 10kHz, but in reality, most transmitters don’t do much above 5kHz. The average human ear can detect frequencies as low as 20Hz and as high as 22kHz. Some people can hear beyond those boundaries, but they are rare.

What this means is, when you produce something in Audition or Pro Tools that sounds especially ‘thumping’ bass-wise, you could definitely be screwing up the air-chain. The air chain can’t pass along anything above 5kHz, but your bass frequencies are still pumped up to balance a full-fidelity signal. Consequently, your boss is right...you’re popping up some wicked bass frequencies that DO get passed along, but don’t have the high-end frequencies to balance them out. Your work will sound like it has too much bass.

Then, you add the problem of a processing chain that your Chief Engineer and GM have painstakingly balanced to sound the way they want. You really need to listen carefully to the air signal when your material is airing and compare it to regular programming material. Then, roll off some of your bottom end. Not all of it, to be sure, but enough to make it not rumble when it plays through the station processing.

When I was younger, one of my favorite authors was John D. MacDonald, who wrote a series of books about a freelance private eye of sorts, named Travis McGee. (All of the titles included a color, like Free Fall In Crimson, The Green Ripper and The Baleful Yellow Eye.) In one book, our hero noted that you could always spot a stereo operated by an old man. As men age, their hearing starts to roll off the top and bottom ranges, so on their stereo the bass and treble are always jacked up over the mids. Don’t be an “old man” and start jacking up the bass and treble because you think they sound weak. (I’m speaking metaphorically, or course.) Regularly check your material against everything else that’s on the air. If it sounds like there’s too much bass, OR treble – when compared to the rest of the station – make an adjustment.

On a related story, I’ve been trying for years to explain why rolling off the bottom end of the VO can really help a promo sound louder and more clear all at once. Well, I was recently standing outside Grand Central Station after a breakfast meeting, when a musician friend of mine was commenting on past issues of this column. He said, “I understand all the plug-ins you talk about; the flange, reverb, limiting, gating and compression, but I don’t understand the big deal you make about filters and EQ.” I was bit flummoxed because, as I say, he’s a musician. How can he not understand why that’s such a big deal? I explained, rather patiently – I thought – how it allows us to mix the music at a much higher level, giving the whole piece a fuller, more natural sound.

Then, I had an epiphany! A bright light shone down upon me. (I know, it was just a floodlight on the Met Life Building, but go with the flow here. I’m on a roll.) He’s a musician! Every voice in the orchestra has a different frequency. In fact, the orchestra is designed to cover the spectrum of sound, based on that fact. The Bass covers the bottom end, while strings cover the top. In between you’ll find the guitars and piano, which almost never play when the solo voice, say a singer, is playing. Now, we producers come along with pre-recorded music and start talking over it. (Dramatic strings swell.) We’re talking at the same time the solo voice is playing. (Horn stab) We’ve created a conflict in the spectrum! So we foolishly turn the music down 6 to 10db. (Muted solo trumpet plays taps…fade to black) The epiphany is done. Now, it all makes sense. If we boost the high end of the speaking voice, we emphasize the higher frequencies, resolving a lot of the frequency conflicts. The net result is, your music can play at full, or almost full, volume – giving the piece a sense of ‘loud’ without actually raising the overall gain.

No sound from me this month. Aside from the fact that it’s really difficult to demonstrate what I’m talking about on a full fidelity CD, I’ve also recently gotten a promotion of sorts and am still trying to figure out exactly what is going on. I am now the Creative Services Director (along with two other people) for the entire New York Clear Channel cluster! I know a lot of people who’ve been doing imaging for multiple stations for quite awhile, but have never known exactly what it means to be a CHR guy one minute and a Rhythmic AC guy the next. Next month’s column will be all about having a split personality… by design!

If you are a multiple station producer, I’d love to hear from you about your experiences in dealing with this. How do you cope with doing Country in the morning and Oldies in the afternoon? How do you deal with different Program Directors giving you instructions that conflict with what other programmers want? How in the world do you keep it all straight? I really want to know, and will gladly share it next month.

March 01, 1995 45244
by Jerry Vigil Forget your every notion of what a "mixer" is. The rapid pace of technology is changing that forever. Some high dollar "recording studio" consoles have already realized the power of combining computer technology...
Read More...
© 1988 - 2023 Radio And Production, LLC
Go to Top