Ribbon microphones are hot again. After falling out of favor in the early sixties with the development of smaller and lighter condenser microphones, new high-tech versions of the ribbon are appearing at various prices. The old RCA 44BX and 77DX ribbon mics probably wouldn’t recognize most of their current progeny, but the past few years have seen a new crop of microphones that combine the smooth character of the ribbon element with modern electronics and manufacturing techniques. Some of these new models have all but eliminated the Achilles’ heel of ribbon microphones, namely the fragile nature of the ribbon element itself.

The latter development may explain why ribbons are hot again. Perhaps it’s just a fashion thing, or maybe it’s because the old RCA ribbon mics (often in questionable condition) still sell for several thousand dollars apiece on eBay and the like. In any case, if what you’re looking for is a retro-sounding VO mic with extended low and high frequency response, a ribbon may be just the thing. Let’s take a look at a few recently-introduced ribbons to see how they stack up.

Wes Dooley of Audio Engineering Associates has been building re-issue ribbon microphones for years, and repairing vintage ribbons for even longer. His R84 is the most affordable of his re-issue series at a list of $1000, and it bears more than a passing resemblance to an RCA 44BX. Since I didn’t have access to a real RCA ribbon, I borrowed the R84 from the university so I’d have a “reference” ribbon to compare to the others.

The R84 is a classic ribbon in almost every sense. It has a figure-8 polar pattern, although it seemed to me that the back side sounded slightly different (actually a bit more aggressive) than the front side. The microphone’s high end gradually drops about 5 dB from 200Hz up to 20kHz, giving it the typical “mellow” ribbon sound, while its 2-inch long, 2-micron thick aluminum ribbon gives it good transient response. Improving on its ancestor, the specs claim that the R84 will handle better than 165dBSPL above 1 kHz (that’s really loud, people). It comes in a durable and functional foam-lined case and includes an integral shock-mount and 10-foot cable that terminates in an XLR.

I plugged the R84 into a solid-state RNP mic preamp from FMR Audio. This is my go-to mic preamp when I want lots of uncolored gain, and like other standard ribbon mics, the R84’s output is on the low side. I set the preamp for 60 dB of gain, which is about 30 dB higher than needed by a typical condenser mic. This translates into a higher hiss level from the preamp; fortunately you seldom hear it in typical close-mic’ed VO scenarios. 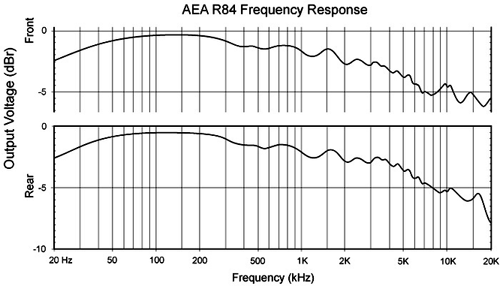 With a male baritone voiceover talent, the R84 performed as I expected it would, delivering a smooth midrange and open high end, with a full-sounding low end that became muddy when the talent got closer than about eight inches from the mic. The mic’s proximity effect is significant, although that actually worked to its advantage with female voice talent.

The R84 is surprisingly directional for a ribbon microphone. Having the talent move his or her head from side to side caused a noticeable change in volume, but not in tone color. This suggests that the mic’s “sweet spot” is large, which is impressive given the R84’s huge size. Considering my experiences with other ribbons where it was difficult to ensure the source signal was hitting the sweet spot at any time, this was a welcome, and positive, change in quality from the rest of the fold.

As with most ribbons, the R84 really beefed up the low end (which makes it useful for thinner female vocals). Though sometimes this caused a bit of mud around 250Hz, this can be fixed with a bit of EQ, generally resulting in a good sound afterward. Still, the R84 is unforgiving where sibilance is concerned — the transient response of the R84 will highlight any esses with male and especially female voicetalent.

March 01, 2006 8004
by Steve Cunningham Every now and again a device comes along that makes you slap your forehead and exclaim “Why didn’t they think of this before?” Well, maybe not... but the little Tranzport wireless remote control for your...
Read More...
© 1988 - 2023 Radio And Production, LLC
Go to Top