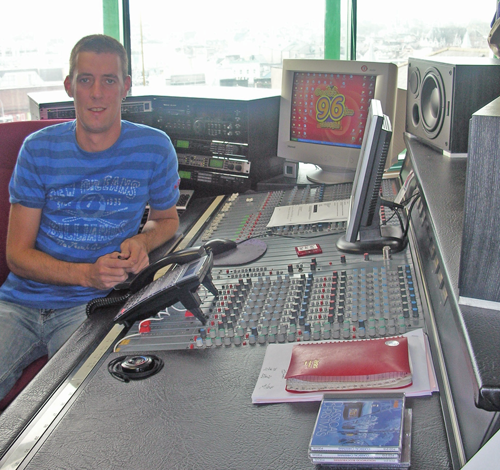 The RAP Interview continues its journey across the Pond with our first visit to Ireland, a country where pirate radio once ruled not so long ago, and commercial radio is still evolving. Brendan Driscoll heads up the Production Department at 96 and 103 FM in the city of Cork, Ireland’s 2nd largest city. We get the scoop on everything from pirate radio in Ireland to mandatory 9-minute caps on hourly commercial loads to Ireland’s advertising watch-dog, the Advertising Standards Authority. Be sure and check out some of Brendan’s excellent work on this month’s RAP CD.

JV: Tell us how you got started in the business, and how you would up where you are.
Brendan: This is my 20th year working in radio in many of its various forms. I started at the age of 16 and got involved in local radio through school. That was two years before I finished secondary school — I believe high school is the American equivalent. I started doing some radio shows with some members of my class; it was a weekly program that used to go out. I explained to the people who ran the radio station that I was interested in maybe getting to know a little bit more about radio. I just started hanging around, sort of getting to know the game, and before long I started doing some stuff on air. I got a one-night a week show. From there I ended up moving into afternoons, and then just took it from there. I’ve always worked in radio. I’ve never done anything else.

JV: Was all of this in the same market?
Brendan: No. The market where I started was the one where I was born in and grew up in, which was Tipperary, which would be small compared to the market I’m in now. Also, this was at the end of pirate radio in Ireland, just before legal radio came in and licenses were issued. So I sort of laid my groundwork in pirate radio. It was a very exciting time for radio in this country because it was just totally moving into a different direction. A lot of people who are currently working in radio in Ireland got their grounding in pirate radio.

So I did a couple of years there with a legal radio station and then moved to Cork where I’ve been now for 14-15 years. I’ve worked in most aspects of the company here. I’ve done some on air stuff, and I’ve been involved in the programming, which I still am to a certain degree. But for the most part, it’s radio production that I’m doing now, mostly the imaging side of things. I do a small bit on the commercial side, but it’s mostly imaging.

JV: Tell us a little about your stations.
Brendan: We’re a network of three radio stations within Cork City and Cork County. We have the 96 FM service which covers the city, and then we have two satellite stations that cover north of the County and the other one covers west of the County. Over the years, they have become somewhat more independent. They were “opt out” operations at one stage, but now they’re pretty independent and they cater to their own regions. Their programming caters to a little bit older target audience as well. The city audience is more condensed with almost half the population of Cork in the city and the rest in the County. So between the three of us, we cover each area of the county and the city.

JV: Your time in pirate radio must have been an interesting experience. Elaborate a little bit on pirate radio, and how it was different from commercial radio there.
Brendan: Pirate radio, when I got involved in it, was actually quite professional. Resources weren’t huge but it was very much professional. Even though they were pirate radio stations, the government was quite happy to sort of leave them alone and let them do their thing because at that stage there was no legislation, no licenses, no hard and fast rules. There was basically no structure for independent local radio in this country. But then a stage came where they decided, okay, let’s get the whole thing sorted out. Let’s issue licenses, and let’s make them all legal, make them pay taxes and look after everyone properly. It was a great time to work in radio because you definitely got to learn a lot. I firmly believe you learn ten times more working in the environment than what you will in college or reading books or whatever. Both are important, but I think practical experience, at the end of the day, is hugely valuable for anyone who wants to get into the business.

JV: Are there any pirate stations left?
Brendan: Yeah. But to be honest, back in 1988 when the government set a date that all pirate radio stations had to close by, the bulk of them did shut down because they didn’t want to apply for a license to start broadcasting legally. But there’s always been a few about, and there still are. In the capital city of Ireland, which is Dublin, there’s quite an amount of pirates still operating. There are a few down this side of the country as well. Cork is the second biggest city in Ireland, and there are a number of them. Some of them are very small weekend type stations — you know, kids having some fun. But the super pirates of the ‘80s really don’t exist in this market anymore. To a large degree, pirate radio is a pretty small operation here now. It’s certainly not like it used to be in the ‘80s.