The following interview is courtesy of LARP. “LA Radio People” is at www.laradio.com and is authored by former McLendon GM, and one of Gordon’s “Magnificent Seven,” Don Barrett. Don was also GM at LA’s KIQQ (Pirate Radio), and has additional stripes in the Movie and Marketing fields.

Another Don and LA radio guy, Don Elliot, had a recent visit with Eric Weiss of the Weiss Agency. The interview posted at laradio.com, and we reprint this interesting chat in this month’s RAP Interview segment.

A Word from the Weiss

Eric Weiss is a man of many talents. The thread that goes through this broadcast agent/consultant/broker’s responsibilities is that he is dedicated to the world of radio and he represents many LARP (LA Radio People). I recently had lunch with Eric at his Pacific Palisades office that has an incredible view of the Pacific Ocean.

I sat down to interview Eric Weiss at his office in a wing of the old Charles Laughton Estate sitting on a bluff top over PCH in Pacific Palisades. The infinity-edged panoramic ocean view is as spectacular as any I have seen on the coast of California. Eric claims he hasn’t had the opportunity to relax in these chairs since our interview... yeah right!

Eric had mentored me on a couple of deals, and I just one day woke up and thought that some of his sage advice should be shared with other LARPs for their benefit as well! 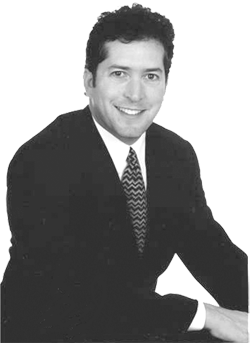 Don: The first question is how do you differ from other LA Based or Hollywood Agencies? How is it different that you specialize in radio?
Eric: Well, the obvious difference is the fact I do specialize in radio talent, consulting and brokering sales and acquisitions in the radio business. I have 20 years experience in the radio business and that’s what I know. This very specialized knowledge base is what I want to use to help my clients. I get many calls from entertainment lawyers and large Hollywood agencies for advice when they have a client who expresses interest in radio.

That is how I came to consult Al Franken. The larger Hollywood Agencies simply don’t operate in our business. Apparently it isn’t lucrative enough for them to devote resources to really understanding our business. Radio is something that their TV people will try to do… if they have to.

Don: Tell us about your background. It is different from most agents.
Eric: Yes, that’s true. Before becoming an agent I was an executive officer or board member of three publicly traded media companies. Most agents grow up in agencies, start in the mail room, and work their way up. My career has been a little different. I started as an attorney for Mutual Broadcasting Company in 1984. Within a year Mutual was acquired by Westwood One Radio Networks which at that time was a small radio network company and did revenues of about 12M a year. I moved to Los Angeles, headquarters of Westwood One, and I spent 10 years overseeing Legal and Business Affairs. I later became an Executive Vice President and a corporate officer, and added the responsibilities of overseeing New Business Development and the International Divisions of the Company. I was involved in a lot of mergers and acquisitions. We acquired Radio & Records Magazine. We acquired radio stations in New York and LA. We acquired NBC Radio Network. By the time I left in 1995, it was over a quarter billion dollar in revenue company and the largest radio network in the world. I did a lot of negotiating, and I was on the corporate side of the negotiations with talent like Casey Kasem, Larry King, Walt “Baby” Love, Scott Shannon and scores of other talent that were with Westwood One at the time.

After I left Westwood One I acquired an interest in and became CEO of a smaller radio syndication company called After Midnite Entertainment – its number one show was After Midnite with Blair Garner. The program is ten years old now and Blair is an award winning host whose show airs on 250 stations. We were able to build a very nice boutique syndication company. Seeing that consolidation was starting and that we had a very nice asset here, I thought we could maximize its value at the time by selling it, so I negotiated a deal to sell After Midnite to Premiere Radio Networks.

After I sold After Midnite to Premiere I became a consultant to and Vice chairman of the Board of Directors of Premiere Radio Networks. Shortly after we sold Premiere to Jacor I began to realize that I’d been at Westwood One, I’d run a smaller syndication company, I was on a Board of Directors of the other largest radio network. I began to look around for something else to do, and I began to think of moving to the other side and representing talent and smaller syndication companies. After I sold my company I began to realize that there were a lot of small syndication companies that were going to have to decide what they were going to do in this era of consolidation. Were they going to survive in this post consolidation world? So I spent the first couple of years brokering a lot of deals in the syndicated radio business, looking at a lot of deals, representing clients and then selling their companies to the Clear Channels, the Jacors, the AM-FM’s. I worked with some great smaller companies for whom I consulted and found buyers – Mike and Bob Lee of Brown Bag Productions, Brandon D’Amore Productions who do Invasion, Matrix and America libraries for Premiere, Casey Kasem Productions, Howie Gillman of Global Satellite Networks, Dana Miller of Entertainment Radio Networks, and Andy Star of Hot Mix Radio Networks.

In addition to that I began to represent talent — Walt “Baby” Love, who was the first to syndicate urban count down and gospel programs. Dave Koz had a smooth jazz radio show that was syndicated already. Many of my first clients were very successful already. They came to me for advice in taking their success to the next level.

April 01, 2011 5318
by Steve Cunningham As recently mentioned in this column, the DAW race continues to heat up in the past half-year or so. There are new entries like Cocko’s Reaper, along with new versions old favorites like Pro Tools 9 that are...
Read More...
© 1988 - 2023 Radio And Production, LLC
Go to Top