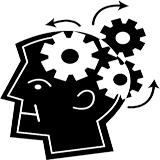 I’ve been spending a lot of time recently thinking about inspiration, what inspires me, and where do I find it. Why? I’m not finding it in the usual places, and the daily grind of churning spots, promos, and image stingers out is starting to wear on me. The nature of the position dictates that there is a certain amount of routine through the work day, and I need a spark every so often to relight the pilot. There’s lots of fuel available. I just need to look for a match to fire it up. In looking around for inspiration I’ve come to a certain conclusion that really surprised me: inspiration really is everywhere around you in everything around you. It’s just waiting for you to trip over it and decide what it is.

For example, if I turn my head to the left while sitting in my main Production studio, what do I see? Just looking superficially it’s another vacant lot in a faceless industrial park. We’re in a 2-story beige building, there is a 2-story white building across the lot, a 2-story brown building across the street, and a double set of high tension power lines across the back that whine and howl in the winter winds and sizzle in the summer rains. What could possibly be more boring and uninspiring? At first glance all you see is over-grown grass and weeds, but look closer... don’t think about what it is, but give yourself permission to imagine what it could be.

Particularly in the summer, when the heat and humidity put the grass into a dormant stage, you see little pathways developing among all the ground hog holes. As I sat there looking at it, you could see a little track developing with the ground hogs running from hole to hole, or could it be that they are racing from hole to hole! There were other ground hogs sitting in the shade next to my building, stretched out on the cool earth with their bellies full of dandelions. They were the crews in the pits. A third group of groundhogs along some bushes at the back under the power lines became the cheering crowds in the stands. NASCAR fans could even think about it as dual series... the bigger ground hogs being like the Nextel Cup cars, and the little brown bunnies racing around like the Busch series. The crows or gulls in the sky could be like the Goodyear blimp covering the event! Once that image starts playing in your mind, you start cheering on your favorites, seeing who’s going to crash into whom, and what’s going to happen in the aftermath of those crashes.

Now I can’t see using that inspiration as the core idea in writing a spot for a client. The point is when you start looking at things not as they are, but as they were or as they could be, your mind starts thinking more creatively. You are exercising your creative muscle. It can be anything, and when you start thinking differently, you get inspired by more and more things. Once inspiration strikes, the good and useable ideas you want will start flowing freely again.

You can look anywhere. If I look out the front of the building, there is a new modern water tower, with the same power lines running past on one side, and railroad tracks running past on the other. Think not as an overworked and underappreciated radio professional, but approach thinking about it like a child. Squint your eyes and imagine not what it is, but what it looks like. Why, soon it becomes God’s own golf tee, with a shiny steel water hazard running up one side, and the out-of-bounds fence along the other! The large area of gravel and sand - used by the city as a snow dump in winter - is the sand trap just in front of the green. The green of course would then be the front lawn of our building, and the building itself becomes the hole. What would it look like to a little bug when it’s just sitting in the hole or even on the lip, when someone uncovers their Big Bertha and launches a ball right at the hole? Now that’s an idea you could explore for a client like a golf course or golf retailer.

It’s not just what things look like or could look like; sometimes it’s taking a moment to look at something the way it used to be. I’ve written before that when we were downtown in a more historic area of the city that I used to go for walks just to look at the architecture. What’s so inspiring about that? Well imagine what it looked like 150 years ago when some of the oldest buildings were started. Imagine the teamwork and commitment it took to build a three-bedroom house then, without power tools, when everything was done by hand and raised into place with a block and tackle and ropes. Imagine the dedication, skill, and passion it took to detail all the corners so everything not only looked right, but was right. What do you think the builders would say if we could bring them forward in time so that they could see that their work not only has survived 150 years, but survived 150 Canadian winters, summers of thunderstorms, record high and low temperatures, fires in the days before fire trucks and hoses, the Great Depression, numerous renovations and coats of paint, and the loves and the arguments of dozens of families who raised hundreds of children? What would they think that not only is their work still standing, but remains in high demand? Could they even comprehend that these buildings are now selling for hundreds of thousands of dollars? Or that the stables in the back have been converted from holding one or two horsepower, to holding the modern car with two hundred horsepower?

Walk into a used furniture store, and sit down and look at an old chair or couch. Let your mind play and let it tell you the story of why the cushions sit at that angle, the kind of person who wore the cushion into that particular groove or would order that kind of fabric, or even what each individual stain came from. As your mind gets used to wandering through time, you’ll find yourself tripping over one great idea after another.

Of course you could be like a songwriter friend of mine who can’t write anything unless he sits staring at a blank sheet of paper in his old typewriter. I think it’s similar though, because if you just sit and stare at something long enough, your eyes glaze over and the daydreaming begins. He just uses a different trigger than I do.

It’s all about letting your imagination run free without being restrained by your internal editor voice saying “That’s stupid! Get back to the work at hand.” If the Wizard of Ads says it’s your beagle running with the hounds, your internal editor is like the owner with a leash and choke chain. Let your beagle show its smarts by hiding the leash under the couch for a while, then heading out the back door to chase squirrels.