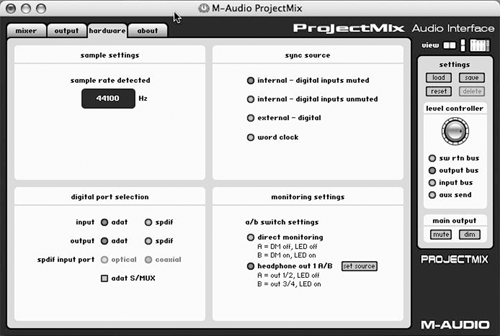 M-Audio’s FireWire Control Panel, which monitors and controls any of the company’s connected FireWire products, becomes a ProjectMix Audio Interface control panel upon installation. This software is integral to operation of the control surface and provides full control over level matching and signal routing.

The panel consists of four tabs: Mixer, Output, Hardware, and About. Each provides status information about signals moving to and from the computer and within the interface. The panel can be used to assign analog and digital inputs to your chosen outputs, select sync ports and settings for monitoring, and set overall panning and level settings for output and aux sends. In the Output section you can assign the master level pot on the control surface to handle the input bus, output bus, software return bus, or aux-send level.

Setting up the ProjectMix for audio is somewhat less than intuitive. For example, if you want to hear an input source (as anyone might on a device with eight mic pre’s and a front-panel instrument input) before setting up your audio app for recording, you must assign the input channel to an output in the software control panel. Although the flexibility and features of the ProjectMix make some detailed setup unavoidable, you’ll definitely want the PDF manual nearby while you work.

The ProjectMix has eight assignable Encoder knobs that are programmable separately to access additional functions. By using the Aux buttons and the Encoder knobs it’s possible to control everything from a channel’s EQ to effect send levels, plug-in controls, even scrolling through effects. These parameters are all contextual depending on the channel, as well as whether you’re in Pro Tools, Nuendo or other editor. Multiple pages of controls can be displayed on the LCD. The precise parameters that can be controlled, depending on your editor, are (mostly) listed in the current PDF manual. Essentially, despite the relatively simple layout of the ProjectMix, it’s possible to control practically any parameter you want through the assignable Encoders.

To make this process simpler, a separate application called ProjectMix Control lets you configure the control surface to communicate standard MIDI messages (instead of the HUI or Mackie commands) with an application or hardware that supports MIDI controllers. Mind you, while this is not rocket science, it’s also not a plug-and-play proposition to get some of the more esoteric functions in an editor to work even with the Control program. It requires a wee bit of programming and a bit of time. One hopes that the engineers at M-Audio will develop other native modes for the ProjectMix I/O — newer firmware can be downloaded directly from M-Audio and installed by the user (that would be you), so the ProjectMix is updatable as newer configurations become available.

When you first fire it up, you choose between five control modes by holding one of the Aux or Pan buttons as you power up. Each of these modes supports a software editor natively, which means you shouldn’t have to configure anything — it basically just works. The five modes are for Pro Tools, Cubase (which also supports Nuendo), Logic, Sonar and Ableton Live. It also supports the Mackie Control and Logic Control protocols which are implemented by many of the other major editors, and is clearly intended as a universal controller and audio interface. For example, if you want to control Vegas, you should use the Logic mode. I had good luck with this in Vegas, even getting the automation to snap the moving fader neatly into place. Being able to move faders rather than using the rubber-band editing in Vegas made the job considerably easier. I had less success with Audition, although I was able to get most functions to work when the ProjectMix I/O was in Pro Tools (HUI) mode.

As is the case with most control surfaces, many of the buttons take on different functions in different applications, but the labeling seems to be based primarily on Pro Tools. For instance, the five Aux buttons allow you to set the levels of sends 1 to 5 in Pro Tools, but work differently in Nuendo. But the basics work fine in native modes — the transport works, the scrub knob scrubs, faders and mutes work as does automation, and track arm buttons arm tracks.

However, some of the specific controls seem to work differently than from within the editor itself. For example, when you group faders in Pro Tools you can grab any one of them and move the entire group as you would expect. But with the ProjectMix I/O, the first fader of the group you touch becomes the master for as long as you touch it. Touching a second fader in the group causes that channel to become temporarily un-grouped, and it can move independently.

From the control surface standpoint, the only significant negative aspect to the ProjectMix I/O is that I still can’t cut sound on it very easily. To be fair, I can’t cut sound quickly on an Icon or Pro Control either, and I’ve been through the formal training at Digidesign. No, most editor-types, be they film dialog cutters, record engineers, or radio production folks still grab the mouse for basic cut/copy/paste/slip-and-slide editing. The only controller I’ve ever touched that could wean me from the mouse belongs to the Sadie workstation. The ProjectMix I/O is great for recording and mixing, but don’t toss your mouse or trackball.

I like the ProjectMix I/O a lot. It works well with most of the editors I use on a regular basis, it sounds good, and it looks nice. The LCDs display lots of good information, the built-in native modes are a pleasant bonus, and the price point is about right. The fact that I’m still grabbing the mouse to edit doesn’t surprise, as it’s the same with almost every other controller I’ve used.

The downsides are the lack of input pads, the dearth of headroom, and the non-intuitive setup panel. But I do think that at a street price of about $1200 USD, it’s a lot cheaper than any other Pro Tools-compatible controller, and does its job nicely. If you’re not a PT head, then there are other controllers that do much of what the ProjectMix I/O does — check out the Mackie Control or the offerings from TASCAM. But if you are a PT head, then this deserves a spin around the block.