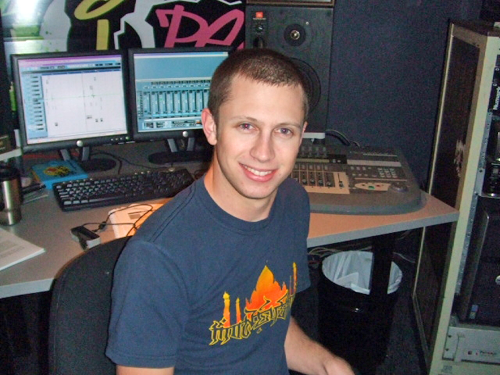 This month’s RAP Interview makes a stop for the first time in New Zealand to check out a newcomer to the world of imaging. Chris Nicoll is only 23, but has already nabbed some national radio production awards, has made some impressive contributions to the RAP CD, and finds himself imaging New Zealand’s top rated CHR format at ZM Radio. We get a look at New Zealand radio, introduce Chris to the international world of radio production, and get a remarkable sampler from Chris on this month’s RAP CD. This is one imaging producer we’re sure to hear more from for years to come.

JV: How did you get started in this business, and how did you wind up at The Radio Network?
Chris: About three and a half years ago I finished at a broadcasting school in Christchurch, where I kind of learned the trade of ads and announcing and promotions. It was like a two-year overview of the complete industry, certainly in New Zealand. Through that time we did little bits of everything; in our first year we ran a seventies music radio station that broadcast to the city of Christchurch in the South Island. Then in our second year, we set up a kids’ radio station. At the time we didn’t know about Radio Disney, but it was kind of the same sort of thing, just aimed at five to twelve year olds, the under surveyed lot of people, and that was so much fun. I got into imaging at that time after discovering Dave Foxx at Z100. Across the rest of that year, I spent my time doing lots of imaging in my bedroom at home where I had a computer.

In the end, when my study time had finished, I was lucky enough to get an opportunity to move to Auckland, which is kind of like the radio central of New Zealand. Most stations are networked across the country from Auckland, so it’s like the place to be in a way. I was lucky enough to land an ad producing gig here at The Radio Network, and that kind of began my development, in terms of getting into writing and stuff, and moving through the ranks here into my current position.

At the time when I started, I was just an intern, and we had four engineers. I just kind of picked up the slack, or I would work outside of their hours to get extra stuff done. I’d take up extra projects, go to clients and do affidavits, or get some recordings of stuff for the other engineers, stuff they didn’t necessarily have the time for. Then one of them left to go overseas, and I kind of jumped in and filled the gap.

JV: Was this something that you wanted to do right after you got out of school?
Chris: When I got out of school, I didn’t know what I wanted to do. My dad’s a scientist and my mom worked in banks and various administrative roles. I didn’t want to be a scientist, and I didn’t really want to be doing admin or anything like that. I had no idea what I wanted to do, but here was this radio thing. This guy came to my school and said, “Here’s radio, isn’t it exciting? And I went, “You know what? It actually is. That looks like fun.” So I moved from where I was living at the time in Hamilton, to Christchurch and studied. When I got there, I wanted to be a jock. My class was a bunch of misfits and they were very extreme personalities. I suddenly realized quite quickly that I was actually the quiet guy, and I was going to have to find something else. So I decided that production was something I could easily pick up and do, because I had sort of been into computers and music and stuff in the past. I just kind of stumbled into it I guess, but I’m glad I did. No way I’d go back and change things and try to be a jock. There’s hardly any jobs for jocks; certainly here in New Zealand there aren’t a lot.

JV: Is everybody voice tracking?
Chris: Actually we do a lot of voice tracking. I know that our morning shows are live, but definitely across the days there’s voice tracking. Here at ZM we have a girl, Sarah Gandy, who’s also same age as I am and is on the air. She’s amazing, and she does two shows at the same time, sometimes three. She voice tracks for Auckland specifically, and then she also does at the same time a show for the rest of the network to a majority of the rest of our markets so that we can have a localized Auckland show. We have a million people in Auckland, and then the other three point something million in New Zealand are based in the rest of the country, but not in one city. So it makes sense to have a local show and a network show so she can localize a lot of her giveaways and competitions and things. So she voice tracks.

We also have sort of like the Howard Stern of New Zealand, perhaps slightly more reined in. I don’t know if anyone’s ever heard of him, but his name is Ian Stables. He is a little bit of a shock jock, but he’s very, very good at what he does, and he does it live. And then we have a night show and they tend to do most of their stuff as a combination between tracking and live.

August 01, 1990 14689
LXP-5 and MRC Effects Processing Module & MIDI Remote Controller from Lexicon by Jerry Vigil This month's Test Drive takes a look at yet another digital effects processor, but this one is a little out of the ordinary. To begin...
Read More...
© 1988 - 2022 Radio And Production, LLC
Go to Top