“We Never Play Commercials that Come from Cassettes.” 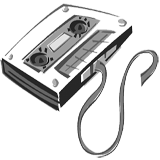 It’s been drilled in my head since I was a kid in this business, “we never play commercials that come from cassettes.” You know the story, rare moment when a salesperson comes in with a cassette, clipped to a production order, hoping to easily push their commercial through the system.

You can voice your concerns to the GM, hopefully the message will be heard loud and clear during their weekly sales meetings, “no muddy sounding cassettes allowed on our airwaves; we can either re-cut the commercial at our higher standards or ask the client to send us a better dub on compact disc or an mp3 file. Quality control is a good thing no matter what business you’re in, radio is no different.”

Ahhhh, but here’s the rub.

It was a Friday afternoon, finally received an mp3 dub via e-mail for a commercial that was set to air on Monday, it came from the salesperson who worked for the major market radio cluster to the north of us.

What? The dub was recorded at 64 Kbps at 22kHz. Hmmmm, salesperson dub. It was low quality, maybe because the voice-talent and client didn’t come to terms on a talent fee. Alright, I’ll write a reply and ask for a higher quality dub. I’ve done this many times in the past with total cooperation from the concerned party. After all, the agencies only want the best for their clients, right?

Could you please send us another dub of the XXXX commercial? This time, a 44.1, 16bit, 160 Kbps mp3 file would be sufficient.

I went ahead that Friday afternoon and added the tag, manually dubbed it into our Audio Vault from 64/22 and reported this issue to my Operations Manager. We hoped to see a new dub on Monday morning. Instead, someone in the daisy-chain of e-mails, replied with this:

Does anyone know anything about this? It’s urgent. We need the XXXX radio ad in a higher quality. Dorothy, is this something you might have in your possession?

Please see below and let me know if you can help.

Then, on Tuesday, I finally received this e-mail from “Dorothy of The North” which had the same low quality mp3 file attached to it. My blood started to boil.

I just spoke with XXXX, Creative Services Director for XXXX. He assured me that the properties of the attached MP3 file are in fact 44.1 Hz. This is a file that we send to radio stations across the country and is on-air quality. I will get the script to you ASAP if that helps.

You can contact either myself or XXXX at (617) XXX-XXXX if you have further questions.

Thanks and have a great day,
Dorothy

LOL. Now I’m a liar, like I don’t know what I’m talking about, my credibility slid to the bottom of the Grand Canyon. The spot has a nice book-ended jingle with a donut read. If they can’t encode the dub at an acceptable rate, who’s to say they will send us the donut for us to voice at good quality? I replied with this slightly irritated e-mail. After all, didn’t they pay their v/o person a talent fee?

The new spot is of inferior quality. It has way too much digital debris. Don’t take my word for it, see for yourself. Download a free version of the Winamp mp3 player LITE. Here’s the link... www.winamp.com

You will hear that it not only sounds bad, but it is encoded at 64 Kbps and 22kHz. Our standard is at least 128 Kbps/44.1kHz. Will somebody please step up to the plate and get this corrected.

After discussing this issue with my OM and other production friends, I decided to call the phone number listed on the e-mail. Ring, ring. The phone answered, it was Dorothy. We had a polite conversation and she agreed to call me back in 5 minutes with their Production Director on the phone.

Instead I received a phone call from a huffy-puffy Fat Cat agency dude, who confessed that he knew nothing about technology and threatened to yank the whole time buy within 2 minutes and wanted to report me to my General Manager because I was stirring up trouble.

I tried to plead my case, but it fell short on his deaf cauliflower ears. Our sales rep then acted as a mediator. The Fat Cat told her that our competition, which was also on the time buy, was able to digitize the original 64/22 and make it sound great. Spineless lot they are... a downright lie. We conducted the same experiment on our end, converted the spot to 44.1, 16 bit .wav file. Conclusion: Crap is crap, no matter how you cut it. You can’t convert an 8-track tape to CD quality can you?

It’s not the advertiser’s fault it turned out this way. I think they should hire a new advertising agency, maybe the arrogant Fat Cat should trust the pros when problems are flagged, instead of  bullying and placing idle threats. We were doing you a favor buddy.

To this day, I still wonder if the v/o talent ever got paid.

July 01, 2009 5860
by Steve Cunningham I’ve done a great deal more location recording lately, including a number of interviews that are destined for podcasts. My go-to recorder has been the Compact-Flash-based Fostex FR-2LE (see the November 2007...
Read More...
© 1988 - 2022 Radio And Production, LLC
Go to Top