Editor’s Note: In November of last year, Hedquist Productions, Inc. (HPI) of Fairfield, Iowa, celebrated the nationwide release of their latest audiobook, A Treasure’s Trove, based on the book written and illustrated by Michael Stadther.

Drawing upon over 30 years of experience as a director, producer, and national-voice talent, HPI President Jeffrey Hedquist directed the 93-minute unabridged version of the book. Editing, music scoring, and final mixing was done by producer Andy MacKenzie in HPI’s digital studio. Jay Mattsson was the casting director and client coordinator for the project.

Producer Andy MacKenzie shares some production notes with us as well as some audio excepts from the finished product, which you can hear on this month’s RAP CD. 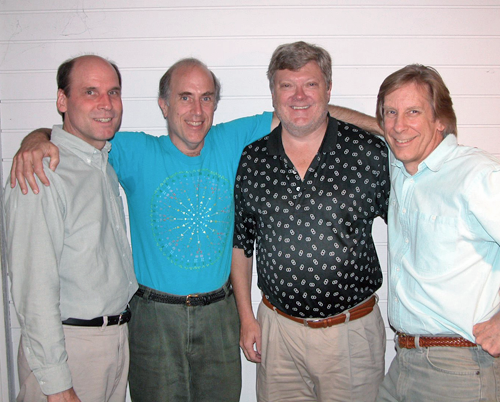 When Hedquist Productions began work on the audio version of Michael Stadther’s fantasy/fairy tale, A Treasure’s Trove, we really had no idea what we were taking on— at least I didn’t. We had done audiobooks before, most notably 27 of the Chicken Soup for the Soul books, but production had always been very minimal — at most some music under the intros and outros. A Treasure’s Trove turned out to be not so much an audiobook as an audio movie — a 93-minute extravaganza employing ten voices (most in multiple roles), more than a hundred sound effects (including many hours of sound design and Foley work) and over fifty pieces of stock music. Not to mention preoccupying almost every waking moment of my life for nearly two months.

Again, as producer/recording engineer on this project, I hadn’t planned to do anything elaborate; I hadn’t planned anything at all. We recorded the voices and then I simply sat down with page one of the script and considered how to bring it to life. 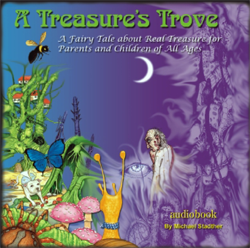 The story begins almost immediately with one of the characters, Snail, being turned into a jewel as she tries to get home one night by a sprinkling of Dark Dust wielded by a flying horde of evil darklings — fairies from the wrong side of the tracks. So: ominous music, naturally — and right there, the first challenge. Originally I had wanted to avoid electronic/synthesizer type music as much as possible, in order to achieve a timeless sound, and fortunately DeWolfe Music Library had a number of discs of unconventional acoustic music that fit right in. But as it turned out, the first pieces I used were electronic, although orchestral in arrangement, because they created an otherworldly and magical/scary backdrop that was just right for this part of the story.

In fact there was some serious serendipity at work as far as things happening in the music at the same time things were happening in the story. Plus I was able to use the beginning of one piece, a collection of shimmering descending tones, as part of the Dark Dust sound effect. Combined with an eerie wind and a high bell sound run backwards so that it grew in intensity and then suddenly cut off, it was perfect for the crystallizing of Snail.

Right after that came the darkling swarm. Two of the actors had recorded some darkling grunts and growls, but I needed a whole bunch of them. Flying.

The swarm was eventually created with a base of growling lions and elephants, slowed down and filtered, to which was added some horrid buzzing (a seriously filtered fly buzz) and some of the actors’ snarling, also roughed up some. For the flying I looked for a bat-swarm in our sound effects collections, without success. But this led me to recall an old dramatization of Dracula I’d had as an adolescent, in which Dracula’s bat-flights were realized with the sound of an umbrella being rapidly opened and closed. I tried this and it worked quite well. In fact, I didn’t even have to do more than one track; after running it through various multipliers and delays I had the sound of a large group flying together.

But that was far from the end of my search for flying effects. Several of the characters could fly and I needed a different wing-beat sound for each. The hero’s sidekick, Pook, was a doth — a cross between a dog and a moth. He was pudgy and really couldn’t fly very well with his tiny wings anyway, so Pook got actual flustered-pigeon wing-flapping sounds.

Also in the cast were Dragonfly, Ladybug, Butterfly, Beetle, Hummingbird and a variety of fairies. Dragonfly got a modified electronic drone. Bee’s voice and flight were created by one of the actors (mostly by a liberal use of the ‘z’ sound) and then filtered for extra buzziness. The other insects and one type of fairy were given wings by means of flapping various things (paper, plastic, cardboard) in front of the mike and pitch-shifting and combining them in different ways. The Flower Fairies were much more in the Tinkerbell vein, being represented by a ‘magical zing’ sound from a disc combined with sped-up trills on a bell-tree. A combination of panning and dopplering got all of them moving around.

Most of the story takes place either outdoors in the Great Forest or in a large tree house. I wanted to give these scenes an outdoor feel but the plotline decreed that all of the Great Forest, except for one small patch, had been killed off by the Dark Dust, along with all life — except for the hero, heroine, doth, fairies and the surviving insects and hummingbird mentioned above. Nature sounds therefore were limited to various kinds of desolate winds, plus leaves being rustled in the still-living area.

The other location was the cave where the villain and the darklings lived. There was a basic cave sound on disc — mostly echoed dripping water — to which I added more drips, bubbling mud, a nearly subsonic rumble, and the occasional burst of noxious steam. Appropriately creepy music completed the scene. The darklings in the cave (and at other points in the story) needed more individualized presence, so I added a few darkling voices of my own and layered them with the others.

There were three types of fairies: Flower Fairies, Pickensrooters and Kootenstoopits. There was one Flower Fairy line, voiced by one of our female actors then pitch-shifted upwards, and a certain amount of background fairy hubbub to which all of the female actors contributed. However, there were two places in the script that called for singing Flower Fairies, and, since nothing specific was indicated in the script and we had no idea what would be happening there musically, we didn’t record anything with our actors. In fact, the heroine was supposed to sing along with the fairies, but, again, we weren’t prepared for that.

So, when the time came to produce these segments it was something of a puzzle. The first segment called for two fairies to begin singing a song and the heroine to recognize it and join in. As it turned out there was no other music going on there to confuse the issue, but there were still some obvious questions: one, what should they sing, and two, how could they sing it without our having to call the female actors back in?

It didn’t take long to figure out that they couldn’t sing any recognizable tune or words, so I wrote down some nonsense words that were mostly vowels and soft consonants and arranged them into something that might be taken for a lyric. I have a tenor voice so I made up what I hoped would be a fairy folk-melody and sang it through once, then pitch-shifted it up just slightly to make it more feminine, and that was the heroine’s part. The Flower Fairy voices, I knew from the spoken parts, needed to be pitched up seven steps, so I made a copy of the heroine’s part, pitch-shifted it down seven steps, and sang along with it twice—one for the melody and one for a harmony—then pitch-shifted those tracks up. I laid them in so the fairies could lead off, and brought in the heroine’s vocal (somewhat buried in the mix for obvious reasons) in the appropriate place.

The second singing-fairy segment came at the very end, when Good had triumphed over Evil and everyone was celebrating. The fairies were supposed to join hands in a circle and sing and dance around the bed where the hero and heroine have been reunited with their beloved doth. This was a little trickier as, this time, there was Good-has-triumphed-over-Evil music (not unlike the music at the end of the first Star Wars movie) in the background, which meant that the fairies would have to sing something that wouldn’t clash with the music but also wouldn’t seem to be part of that music.

Same trick, basically: I made a copy of the music, pitch-shifted it down seven steps and sang a simple little “La, la, la” melody over it a few times, then pitch-shifted the voice tracks up the seven steps.

The Pickensrooters and Kootenstoopits had no lines but needed to be sonically represented. The Pickensrooters, although on the side of the good guys, were somewhat gnarly and grumpy, so I improvised a pinched voice that sounded as though I was cussing in Fairy-speak, pitch-shifted it (but not as high as the Flower Fairies) and gave it some wings. The Kootenstoopits were flightless and, as the name suggests, not particularly bright. The voice came out as a kind of modified Homer Simpson (more Homer as a child if Homer could speak Fairy). This was pitch-shifted even less than the Pickensrooters and given a sped-up set of pattering footsteps.

The Wise Woman character in the story was an Ent-like living tree called Yorah. She was given a slightly starchy comic-British voice by the actor, but needed something to make her more magical without sounding like a visitor from Lord of the Rings. I experimented with various types of reverb but since the villain does most of his speaking in a cave with a great deal of echo that didn’t seem like the right direction until I finally added just a touch of backward reverb, and that seemed to do the trick.

The real challenge of this production was the music. The decision not to have original music created for the recording (except for one short segment titled “Dreamer One” with lyrics by Michael Stadther and music composed, arranged and produced by Michele Brourman) meant I might have to sift endlessly through a huge pile of stock music CDs to find something that sounded as though it had been written specifically for each particular scene. Again, I was amazed at how often there would be something from DeWolfe that fit not only the mood but the pacing required, be it whimsical, dramatic, scary or poignant.

Meeting the short deadlines on this production just about killed me, involving as it did several all-nighters in a very short space of time. However, it has been one of the most creative and fun projects of my career — possibly the most — and I’m very proud of it. Besides, I got to learn four new dialects: Darkling, Flower Fairy, Pickensrooter and Kootenstoopit — and you just know that’s gotta come in handy.