My old faithful Yamaha NS-10M studio monitors are dying. I noticed that the foam surround in the right woofer is starting to crack, and Yamaha doesn’t make the woofers anymore. I suppose I could look on eBay for replacements, but buying speakers sight unseen doesn’t seem very smart. Time to look for some new nearfield reference monitors, preferably powered ones since there are so many really good active monitors on the market, and ‘cause I want ‘em (that’s why!).

The holiday bills have arrived, so I’ve decided to focus on monitors I can buy on the street for less than 600 bucks, and hopefully a lot less. I also want to stick with 5"-6" woofers to get a fair bass comparison (this will be important later). I corralled a few pairs of monitors that meet that criteria, set ‘em up in my studio (aka The Cave) and gave ‘em a workout using several months of RAP CDs (thanks Jerry!).

A word of caution about evaluating studio monitors... first and foremost, the choice of studio monitors is a highly subjective and personal one, not unlike choosing boxers or briefs! While it’s a good idea to ask around and see what others use and like, remember that you gotta listen for yourself — the opinions of other people (including yours truly) may point you in a good direction, but only you can decide what sounds good to you. YMMV (Your Mileage May Vary). 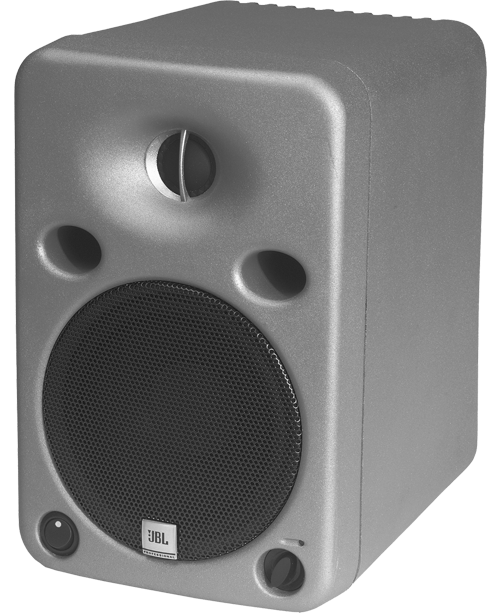 The JBL LSR25P monitors aren’t new, and in fact have been around for about four years. The enclosures are die-cast aluminum finished in a gray powder coating, and measure 6.8 x 10.6 x 9.5 inches deep. A circular rocker switch in the bottom left-hand corner of the baffle turns the speaker on, and a rotary volume control at bottom right sets the monitoring level. A green LED above the volume control lights up when powered, but flashes red if either amplifier clips.

The rear panel has the amplifier’s vertical heat sink fins at the top, and JBL cautions that the speakers should not be used horizontally. The lower portion of the back is recessed, with XLR and phono connectors plus an AC power jack at the top, mounted in such a way that speaker wires will hang vertically down from the connectors. This lets you mount the LSR25Ps flush to a wall.

Inset into the rear panel are also four dip switches that alter the frequency response of the speaker to suit your installation. The first switch introduces a high-pass filter at 80Hz, to help match the speaker with a subwoofer. The second switch modifies the low-mid frequency response to compensate for wall-induced boundary effects — engaging it cuts about 3dB at 225Hz. The last two switches boost and cut the high-end response up or down by 1.5dB above 2.3kHz (which is also the crossover point), and can be set to taste. I left these flat for the duration.

Two input connectors are provided, with the electronically balanced XLR expecting to see +4dBu signals, and the unbalanced RCA looking for -10dBV. With the front-panel volume control turned full up, input signals at these levels generate an output of 96dB SPL, with a maximum peak level of 109dB SPL.

The one-inch titanium-composite tweeter used in the 25P is exactly the same as the one employed in JBL’s larger (and much more expensive) LSR32 and LSR28P, and is driven by a 50-watt power amplifier. The low-frequency driver consists of a relatively small 5.25-inch paper-coned driver, driven by a 100-watt power amplifier. The cabinet has two ports that vent to the front below and to either side of the tweeter to help the bass response, and the enclosure is magnetically shielded so you can set it next to video monitors without ill effects.

In use, the LSR25Ps are definitely light on the very low end and won’t deliver thumpin’ bass, but that’s not to be expected from boxes this size. But above 80Hz they are sweet, and present a well-balanced sound in the midrange and high end. The stereo imaging is very precise, and the sweet spot is quite broad — you won’t find the sound changing as you move your head around while listening.

If you like your playback really loud, you may be disappointed with the LSR25P. But listening at normal levels in The Cave, they provided plenty of level without ever causing the LEDs to blink red. The 25Ps are very clean and open sounding with very low distortion throughout the frequency range, even when the level is cranked.

In fact, the upper mid-range is the real strength of these speakers, which deliver a lot of resolution and clarity in this region. The high treble is well controlled, but the lower registers are noticeable by their absence — if you have to have “chest thump,” then a decent subwoofer should make a world of difference. Since I’m replacing speakers that have absolutely no low bass, I don’t miss the deficiencies below 80Hz, which are at least smooth and predictable. Meanwhile I found the LSR25Ps deliver as much clarity in the low-mids and midrange as do the NS-10Ms.

The LSR25Ps do sound like JBL speakers, so if you’re a fan of JBLs then you’ll definitely like these. Unfortunately they’re also priced like JBLs, with a suggested retail price of $399 each — street price is below $300, but that’s still substantially more than other 5-1/4" woofer-driven speakers.

August 01, 2002 9235
by Steve Cunningham Why would anyone involved in radio production ever consider using a software editor with the word “Video” in its name? If the product is from Sonic Foundry, purveyors of the industry-standard Sound Forge...
Read More...
© 1988 - 2023 Radio And Production, LLC
Go to Top