Production 212: Sound is Sound... - Making the Most of What You've Got

Being creative isn’t always about writing a funny scene or making a fabulous new sweep effect. Sometimes, it’s just getting the point across in a promo or spot, in spite of the fact that the writer gave you two minutes worth of copy. Sometimes it has more to do with urging a cranky old workstation to perform beyond its normal capabilities. Creativity is finding a way to do something out of the ordinary. Most importantly, creativity does NOT reside in your console or workstation. 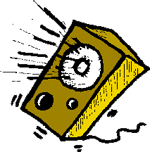 Case in point: I got an email today from a Southern California producer that bemoaned the fact that he was stuck using Sound Forge® rather than Pro Tools®. I’m not really sure if he was trying to make an excuse for the quality of his work or not, because the attached demo file was excellent; one of the slickest, well-produced demos I’ve heard in recent months. Clearly, this guy is a creative genius… he just doesn’t know it.

This got me to thinking about producers’ preferences for a workstation and all the old arguments about which one is the best, an argument that, to me, was always a non-starter. Do I think Pro Tools® is the best workstation money can buy? Yes, for me it is, for a lot of reasons, but that’s just me, gang. When I first started producing for Z100, I was using a two-inch 8-track MCI recorder, with a cranky transport and heads that would drop out of alignment if you sneezed hard. I had an ancient Audiotronics console, a couple of ITC cart decks with DBX cards, an Orban graphic equalizer and a couple more MCI quarter-inch two-track decks. I pitched a fit over my setup every year to the powers-that-be, to no avail. Their reasoning was simple. “We love the work you’re doing. Why should we go through the expense of getting you new gear?” Honestly, I never had an answer for them. I was doing excellent work, even if I say so myself.

Every once in a while, I hear from some producer in East Elbow, Pottsylvania who still hasn’t made the transition to digital, and yet his or her work is every bit as compelling and exciting as the next person’s. This leads me to the conclusion that sound… is sound. It doesn’t really matter what you push it through. If your vision is clear and your techniques are solid, you will produce excellent stuff. If you apply some creativity to what you’re doing, you can be as good as the next producer… maybe better.

A truly creative person finds all kinds of chances to really shine. For example, there are always situations that require you to come up with a creative solution for an obvious error. Perhaps your VO guy or gal forgets a line or totally mangles a pronunciation. That’s when you get to be creative. You alter the script a little and have a caller or a group of interns say the line. Maybe you change the premise slightly and take the setup on a different tack.

To serve as an audio example this month, I give you a little ditty in which I had to make the best of a bad situation. Our summer promotion involves the tried and true Phrase That Pays contest, with a twist. We scored a Chrysler 300, which we’re “pimping,” a la Nelly’s car in his videos. We got Nelly to agree to participate by cutting some tracks for the promos and then giving the car away in Times Square after the contest is over. The bad situation came up when someone at the record company used a DAT recorder to capture his lines, over-modulating the audio. By the time we got the DAT, Nelly was halfway around the world and we had to use what we got.

I pushed his tracks through several plug-ins, trying to correct the sound, and made some progress. (Using the C1 module in the WAVES Gold Bundle to upwardly “expand” the audio made the biggest difference.) Then, I went through all the out-takes to look for something I could use that would give his parts an unrehearsed feel, so the listener would be more forgiving of the quality. Nelly is famous for saying Hot in Hurre, and sure enough, he said, “Times Squirr.” He then corrected himself in an aside, and I had the perfect take. With some creative wordplay, I was able to give our dialogue some snap without making him sound choppy.

I just finished with my summer intern here at Z100 and came away learning more than she probably did, which is almost always the case. For the first time, I tried seriously to teach an intern to be creative. I used to think that the “art” side of what we do is impossible to really teach; that it’s either something you have or don’t have. I knew I could teach her the “science” side of it, demonstrating the bells and whistles and giving Ashley a grasp of the tech aspects of production. After we spent a few days talking about creativity – where it comes from and how to capitalize on it, she wrote and produced a series of Independence Day sweepers that really slammed home. I knew I needed to revise my estimate of what can be taught.

Now that I know creativity can be taught, I have to point out that creativity comes from you. It’s not in your workstation, nor is it always in the script. It’s in your head. Don’t keep doing the same thing because it always works. Stale is stale and radio ain’t about stale. Be all you can be. Stretch your brain. Try something new. Comb through this month’s RAP CD and listen for a new way to say something. Watch MTV tonight or go to a movie. Read a magazine (preferably not one with a fold-out center-page) and catch up on what’s new in pop-culture. (Save that other magazine for later.) Keep filling the well from which you draw your creativity, and dip in for a long, deep swig every time you sit down to your console. Think masterpiece.

Finally, if you’re one of those producers who suffer from workstation envy, get over it! Can you tell me what kind of camera Ansel Adams used? Do you know what brand of watercolors Vincent van Gogh painted with or whether Michelangelo used Craftsman® tools to chisel David? I don’t think so. You need to question whether you can produce that level of work with anything other than Pro Tools®. The answer should be obvious.

July 01, 1990 18633
by Jerry Vigil Perhaps one of the handiest tools in a production room is a mike or voice processor. Gear that falls under this category usually consists of several processors built into one. This frees up outboard gear for other...
Read More...
© 1988 - 2023 Radio And Production, LLC
Go to Top