The Marshall Electronics MXL V69 Mogami Edition tube condenser microphone is so named because it features Mogami cabling throughout, from the inner wiring to the cables included with the kit. Its brass body is painted black, and the gold-plated grill makes it look pricier than it is, although when you pick it up you’ll figure out part of how they got the street price under $300 — it’s surprisingly light.

The V69ME comes in a kit with a hardshell carrying case, a well-designed shock mount, an external power supply box that provides phantom power, a 7-pin Mogami interface cable and a Mogami XLR cable. The kit retails for $399, and hits the street just under $300. The V69ME uses a 1" diameter diaphragm in a cardioid-only pattern. It has a 12AT7 tube for amplification and impedance matching, which in turn feeds the transformerless internal electronics. The specs claim an equivalent noise level of 14dB, and an SPL rating of a healthy 140dB. There’s no dB pad or roll-off filter on the V69ME, and while I didn’t miss the pad, I would liked to have had a roll-off to help control the mic’s proximity effect. When worked closely the mic has a tendency to go “humpy” in the lower midrange, especially with baritone men.

Having said that, the V69ME has a reasonably flat frequency response curve, with a slight scoop in the midrange, which is typical for tube mics in this price range. It definitely has that warm “tube” sound, and the tube harmonics helped impart a bit of “air” to a big-voice VO performance. I liked it less on a female VO, where that slight scoop tended to make her voice sound a little thinner than I liked, but even then the tube warmth kept her from sounding harsh.

The sturdy shock mount is worth a special mention, as many budget mics come with a sub-par shock mount (I have an AT4033 with a shock mount that’s currently held together with rubber bands). This is not as important as the quality of the mic itself, but a crappy shock mount will definitely slow you down during a session and annoy you in general.

The overall build quality of the V69ME is solid and the sound is above average, if a little dark in the low mids. This is a good mic for adding warmth, color and air to a male VO. It was impossible to overload, and has an acceptable level of self-noise. Coupled with a clean solid-state mic preamplifier, the V69ME provides a whole lot of bang for the buck.

The Studio Projects microphones were among the first of the low-cost Asian microphones to hit the US. Their C-series microphones got solidly good reviews, at least after audio pros stopped sniggering about their unabashedly Chinese origins. Their B-series mics represent their new “budget” line, providing even lower-cost versions of the C-series. Of the three B-series mics available, the TB1 is the most expensive at $389.99 list, and $275 street — it’s sort of a less-expensive version of Studio Projects’ $699 T3.

The TB1 is a large-diaphragm cardioid mic, with a 1-inch, 3-micron capsule and a 6072 dual-triode tube for amplification. Its self-noise level is 16 dB (A-weighted), which is slightly higher than some of the other low-cost condensers. It comes complete with an external power supply, a mic clip, a 7-pin interface cable, and an aluminum-clad “road case” with a foam lining. I always have to wonder what would happen if manufacturers skipped the case and put that money into the microphone instead. Perhaps they could improve the clip and cable, as detailed below.

The mic clip initially gave me visions of a trip to the floor, as it’s a small thing that grips the mike at its bottom shank. But it turned out to fit the shank well and tightly. Still, the mic is a little too heavy for this clip — when trying to position it on its side, the clip kept rotating until I manipulated the stand such that it would sit at the required angle. PMI Audio’s website has instructions on how to tighten the hidden screw on the clip, and once that was done the mic stayed pretty much wherever I put it.

The TB1 has much less of that “tube” coloration than the other mics I evaluated. However, I immediately noticed that it was substantially brighter than the others as well. A quick look at its frequency plot reveals why — there’s a noticeable rise that starts at about 2.5kHz and peaks at about 10kHz. This worked well for me in terms of adding “air” to VO performances, and after several recordings it seemed to me that the tube somehow prevented that airiness from becoming harsh.

Like the others, the TB1 has no low-frequency rolloff switch or pad. In this case I didn’t miss either one, since its proximity effect is quite tame. However, the TB1 was susceptible to popping, and it’s a drag that Studio Projects doesn’t include a windscreen. You’ll definitely want to put a popper stopper in front of this puppy if you’re going to do any close work. 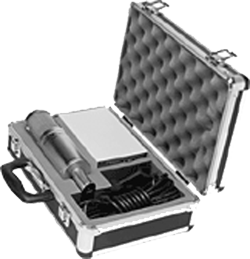 Most of the female VO perform-ances I recorded were excellent through the TB1. The only exception was with one woman whose voice tends to sound cutting anyway, and the spot we recorded required her to give an energetic rant. Some of her peaks became shrill-sounding, with the mic’s high-end bump accentuating what was already present in her voice. With that exception, however, I liked the openness in the top end.

With the exception of the clip and cable, the build quality of the TB1 was very good. The sound quality was also good, with a flat midrange that worked well and required little in the way of EQ. This mic has a higher level of self-noise than I like, although at no time did it become a problem when recording. The top end peak is great for soft-to-normal VO reads, but one needs to be careful with gonzo scripts involving women. Well, that’s probably a true statement in any case (ducking).

April 01, 1993 13645
by Jerry Vigil This month's Test Drive features a box from a company you don't hear a lot about. Sound Performance Laboratory, or SPL, is based in Niederkruchten, Germany, and their Vitalizer Psychoacoustic Equalizer offers an...
Read More...
© 1988 - 2022 Radio And Production, LLC
Go to Top