There’s something just plain handy about a stand-alone CD burner — that is, one that’s not part of a computer. A self-contained CD recorder into which you can plug microphones, with input level controls and transport controls, is often much faster and more convenient than even a laptop-based hard disk recording system. It’s even more convenient if it’s portable, as is the Marantz Professional CDR300, which retails for $849.

Designed to replace cassette and DAT for remote recordings, the CDR300 is a stereo recorder that writes directly to CDR or CDR/W. It has two mic inputs with phantom power and built-in limiters, and a built-in mic and speaker. The CDR300 nominally works on AC power, but Marantz Pro offers an optional lead-acid battery pack for true portable operation. 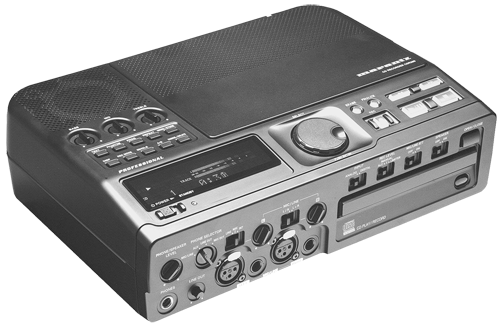 CHECKING OUT THE BOX

The CDR300 is housed in a black plastic case that seems sturdy enough, and it’s just a bit bigger than a portable cassette at 11 x 9 x 4 inches. Weighing in at 7 pounds, the CDR300 is a bit heavier than some portable MiniDisc recorders and it lacks a handle, but put it in a case with it’s optional RPS300 battery pack and the CDR300 should go anywhere you need it.

On the top panel you’ll find a multi-function LED display, typical of those on most digital recorders. This display shows the track ID number, the timing for each track, various indicators for input and playback modes, and contains the meters that show the level of both channels. A standby power switch lives just below the display, although the main power switch is on the rear panel.

Next to the display is the Select dial which can be used in a number of ways, depending on the mode you’re in. To the right of the dial are the transport controls for the CD mechanism. These include Play/Pause, Stop, and Search (Fast Forward and Reverse). This area also includes buttons for Record, Erase, and Finalize. To change tracks, you use the Select dial to scroll through Track ID numbers, or you can use the ID increment buttons on the wireless remote control.

Above the display are the bass, mid, and treble EQ controls for playback, and ten control buttons. Most of these set the CD playback modes, like Single play, A-B loop, Repeat selection, and Program play. The Phantom on/off button is here, as is a button to control the Display. Other buttons like Rec Mode and Menu/Store let you access various cool features of the recorder, but many of these features are buried several levels down — more on these later. On the top left is the built-in mono speaker, while the top right holds the built-in microphone.

The left front of the CDR300 is home to a 1/4-inch stereo headphone jack, a combo volume control for the monitor speaker and headphones, a line out level control, and a phone source selector switch that lets you monitor the Mic/Line inputs, the AUX input, the Line Output, or the Mix Output. The latter lets you hear anything connected to the Mic/Line inputs and the AUX inputs mixed together. To the right of these are two phantom-powered XLR mic preamps with additional balanced 1/4-inch line inputs, input trim controls, and a source selector that chooses between Line Input, Mic Input, and the built-in microphone. There’s also a switch that lets you choose to send the left and right Mic/Line signals to their respective stereo channels on the CDR, or to send left and right mixed to both channels of the CDR to create an essentially mono recording.

The right front features switches to choose the analog or digital inputs, the automatic level control (limiting), a -20dB attenuator, and for turning the internal speaker on and off. Below these is the CDR drive, the Open/Close button, and the infrared receiver window.

On the rear panel you’ll find three pairs of RCA jacks. The MIX and LINE output jacks provide a -10 dBV signal, while the AUX input jacks accept unbalanced signals at a nominal 0 dBV level. The S/PDIF digital ins and outs are also on RCAs here. Next to these are two more RCA connectors for the optional wired RC-5 remote control, and a switch to choose between the included infrared remote and the aforementioned wired remote. There’s a footpedal input for pausing the CD during playback, although this doesn’t work during recording (remember, this is CDR, not tape). To the right is the power switch, the IEC power connector, and the 4-pin XLR connector for the optional battery pack mentioned above.

The analog-to-digital converters work at 24 bit resolution, and the digital-to-analog converters are 16-bit units. In addition, the digital S/PDIF inputs have built-in sample rate conversion that lets them accept signals sampled at anywhere from 11 to 58kHz. The CDR300 has good-looking specs — Marantz Pro claims that the analog line inputs have a signal-to-noise ratio of 80dB with a THD of 0.05%, while the mic inputs have a S/N ratio of 60dB and a THD of 0.2% (not bad, but not as good as a good external mic pre). The S/N and dynamic range for CD playback are both given as 85dB, with a THD figure of 0.05%. 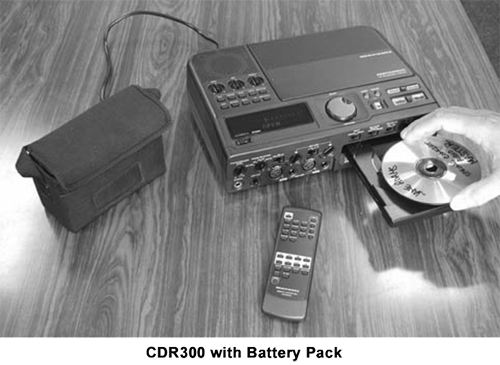 December 02, 1990 31568
This month's Test Drive veers a little off the norm and down a road radio producers are getting more familiar with. That road is called For-The-Musician Avenue and it intersects with Radio Production Boulevard on the poor side...
Read More...
© 1988 - 2022 Radio And Production, LLC
Go to Top