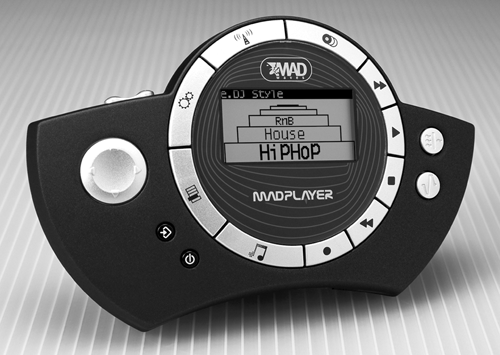 What do you get when you cross an MP3 player, a MIDI sequencer, and a Nintendo game controller? For the Radio One group of stations, you get an almost unlimited supply of royalty-free music beds for its Hip-Hop and R&B affiliates. You see, Radio One is the first group to use the subject of this month’s review, the MadPlayer from MadWaves Corp., for just this purpose.

The MadPlayer is a hand-held music composer and “beat generator” that is capable of playing MP3 and WMA (Windows Media Audio) files. It uses what MadWaves’ calls its Generactive (tm) Music Technology — a set of computer algorithms that automatically generate music in several styles — to create copyright-free music that you can then alter (that’s the “interactive” part of Generactive) to suit your own devious purposes.

You can save these songs within the MadPlayer as small “.MAD” files, or play them out to a master recorder or computer for further editing and use as beds. 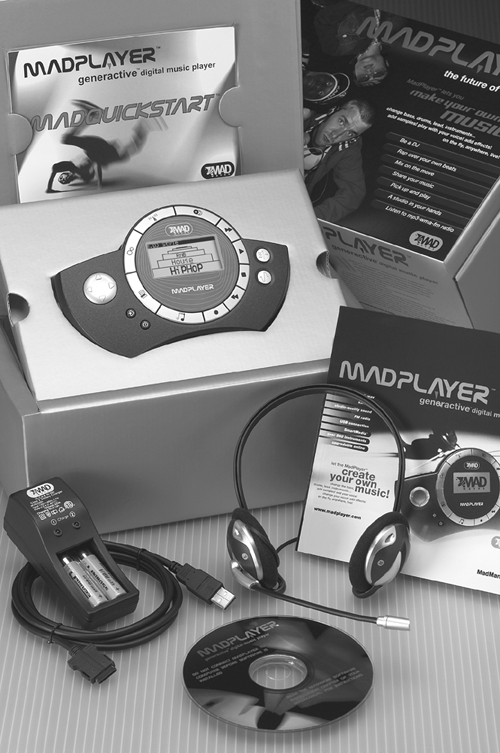 CAN I PLAY DOOM WITH IT?

Well, no, although the unit itself is about the size of a Nintendo game controller. In fact, it bears some resemblances to that device, with a round, 4-way “joystick” (without the stick part) on the upper left, and four buttons around the edges. But the resemblance ends there, as the center of the MadPlayer consists of a circle of ten buttons, with an LCD display in the middle.

The power on/off and Save/Edit buttons are leftmost on the top. The Save/Edit lets you save MadSongs or enter the unit’s Edit mode when an item has been selected from a list of songs or samples. Look to the right of the MadPlayer and you’ll find the Pitch/Tempo and Effects/Filter buttons, which are always live and let you adjust those parameters of the tune that’s currently playing.

The ten buttons around the LCD consist of two groups: the larger buttons are Mode Keys, that directly access the e-DJ, Songs, Samples, System, and Radio modes (yes, there is a built in FM radio, more on that later). The smaller buttons are the Player Keys, which also act as navigation buttons when you’re in an edit or selection menu. The device has the standard set of play, stop, FF, and RW buttons, along with a Record button that controls real time sampling.

There are up/down Volume buttons on the top left of the MadPlayer, while on the top right are jacks for a set of headphones and a microphone, both included. A proprietary jack on the bottom surface of the MadPlayer connects it to your PC or Mac via USB, and the battery compartment can be found on the back of the unit.

The MadPlayer is definitely a consumer electronics product, and the packaging and accessories show that — it’s designed to look good on the shelf at Best Buy. The list of accessories in the box is quite complete, and includes a set of headphones with a mic attached, two AA rechargeable batteries with a charger (you’ll need these), a USB cable with the correct proprietary connector, a 32MB SmartMedia memory card, a CD with the MadWare software, over 600 (!) samples and songs, and a nice printed manual.