SFX Machine’s system requirements are modest. On Windows, you’ll need to be running Win95 or better, with about 5 MB of RAM in addition to that required by your system and editor software, 5 MB available hard disk space, and an 800 x 600 or better display.

Since SFX Machine RT is a VST plug-in, you’ll also need a VST 2.0 host program to run it. At the moment, the following editors support VST and SFX Machine: Cakewalk Project 5, Emagic Logic 4.2 or higher, Magix Samplitude 7.0 or higher, plus Steinberg’s Cubase SX, Nuendo and WaveLab 3.0 or higher.

However, you can also use a VST wrapper program like Spin Audio’s VST DX Wrapper Pro ($40 at www.spinaudio.com), to “fool” DX-compatible programs like Sound Forge, Acid, Vegas, and Cool Edit into hosting SFX Machine RT or most any other VST plug-in. If you regularly work in Forge or Cool Edit, then VST DX Wrapper Pro is a good investment in any case because it gives you access to all those great cheap or free VST plug-ins.

On the Mac side, you’ll need a Mac G3 or better running OS 8.5 through 9.2 for the VST version, or OSX 10.2 or higher for either the VST or the Audio Units version. The RAM, hard disk, and screen requirements are the same as for Windows, and you’ll also need a VST-compatible editor like Peak, Emagic Logic, or TCWorks’ Spark XL. Alternatively, Mac users can use the Audio Units version with Peak, Emagic Logic, Spark XL, or MOTU Digital Performer 4.0 or higher. 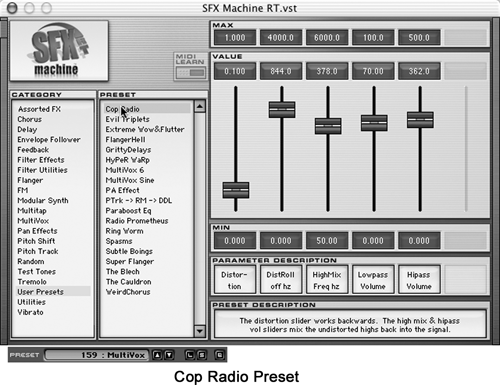 The most important change made to SFX Machine RT is that it now works in real time — hence the RT in its moniker. With the older Premiere-format version, there was a preview function that let you hear changes you made to the preset, but to actually apply the effect you had to wait while the program went off and wrote a new effected audio file. And if you didn’t like the results, you had to undo the processing and start over. Not any more — SFX Machine RT now operates just like any EQ or compressor. Just insert it on an effects buss like any other effects processor, and listen to the results in real time.

After loading a mono or stereo sound into the VST-compatible editor of your choice, you call up SFX Machine as you would any other VST effect and you’re presented with a single window in which everything happens. The window is divided into two sections: on the left are two lists, a category list and a preset list, while the right side has six sliders that control the various parameters of a given preset.

The right side of the screen is occupied by the aforementioned sliders for controlling the preset’s parameters. Some presets use all six sliders, while others utilize only one or two. Each slider comes complete with a label indicating the function of the slider, along with numbers indicating the maximum, minimum, and current settings. The maximum and minimum numbers are essential since most of the parameters aren’t calibrated in dB (or any other known units), so being able to see the max and min values of a parameter helps you make sense of the current value.

The slider functions change depending upon the preset, and each slider may actually control multiple parameters. Typical functions include LFO, vibrato rate, wet/dry mix, filter rate, modulation frequency, feedback percent, echo time, vibrato per cent and master volume. Incremental moves can make dramatic changes to the sound. And excessive moves with some sliders (like feedback) may cause loud distortion and clipping. You’ve been warned — you can fry tweeters with some effects.

Below the sliders is a brief text description of the current preset, which adds a nice touch to the interface. At the bottom of the window are several utilitarian buttons labeled L, S, and B for load, save, and bypass. These allow you to store and recall any of your own versions of the presets, as well as bypass the effects entirely. 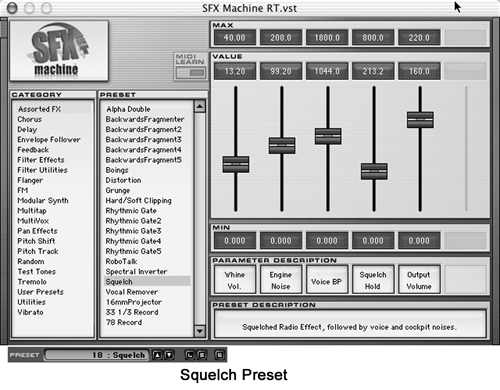 A preset’s source can either be the audio sample or generated waveforms (sine, triangle, square and saw and white noise). If a waveform is used, the frequency can usually be specified as a note (such as A4) or frequency value (such as 440 Hz). Through the preset section, a DSP algorithm is selected. Choices include envelope follower, pitch tracker, quantize frequency, DC offset, PhaseShape, Raise to Power, Delay, Sample/ Hold and several resonant filters. With each algorithm, several adjustable parameters are available. Once the Process section modifies or analyzes the input signal, it is sent to the modulation section.

SFX Machine provides two independent modulators inside. Each of these may be routed to any of the eight blocks including itself. Some of the mod choices include amplitude, mix, ring, pan, frequency, delay, sample/hold and filter. The amplitude or depth of the modulation can be specified in the Mod Amp field.

And while part of me wanted to get inside the program and muck about, routing modulators and DSP processes, it’s not possible. You have to do everything from a preset. However, there are enough presets available that it’s really not necessary — just find something close and go after the sliders.

Several categories and presets caught my attention for promo work. There are several filters that can replace the old phone filter effect, including Squelch which mimics the communication heard in the cockpit of an airliner, and Cop Radio which is full of nasty distortions that still don’t obscure the dialog. In the FM category, interesting effects include “Car alarm”, ”Siren”, and “Telephone Ring.” I have also programmed some of my own patches. It was fairly easy to simulate the sounds of an old modular synth for R2-D2 effects and newer sweeps. 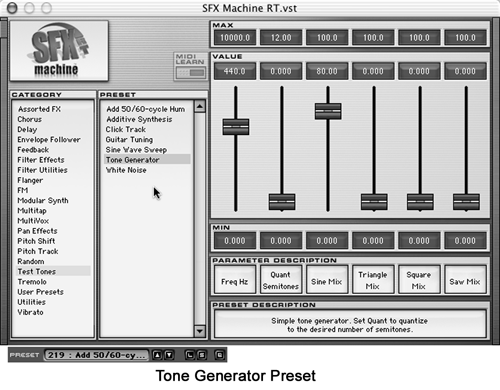 Here is a list of the different categories and the presets included with SFX Machine RT. Most of the names are self-explanatory, although you’ll want to get the demo to experience the full effect. Remember, these presets are all tweak-able, and once tweaked to your liking you can save them for later.

There are tons of possibilities with SFX. The slider page makes basic preset changes a breeze. With all this power, the novice may feel somewhat daunted. Experimentation however, is what SFX Machine is all about. But the interface is about as easy to use as it could possibly be. For the production human looking for something different, SFX Machine RT is a must.

SFX Machine RT carries a suggested retail price of $149, but is currently available at a special price of $99. For more information, visit www.sfxmachine.com.

August 01, 1990 14682
LXP-5 and MRC Effects Processing Module & MIDI Remote Controller from Lexicon by Jerry Vigil This month's Test Drive takes a look at yet another digital effects processor, but this one is a little out of the ordinary. To begin...
Read More...
© 1988 - 2022 Radio And Production, LLC
Go to Top