Book Review: "Voice Over Etiquette - The Definitive Guide to Working in the Voice Over Industry" by Bill Filipiak 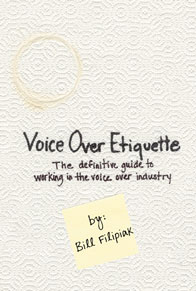 Pursuing success as a voiceover talent requires skill, good old hard work, and, according to Bill Filipiak’s new book, “Voice Over Etiquette - The Definitive Guide to Working in the Voice Over Industry,” a healthy dose of common sense. With refreshing directness and honesty, “VOE” empowers you with real-world information culled from Filipiak’s multi-textured career, to help you make your way in the world of voiceovers.

Every business has its own lexicon, its own jargon, its buzzwords. Eavesdrop on a couple of biotech engineers on the train, for example, and you won’t have a clue what they’re talking about. Sure, they’re “speaking each other’s language,” but it’s more than that; they’re using all those funny words because that’s where “the game” is played. It’s the “inside game,” where power is exchanged as well as information. And Filipiak’s as “inside” as they come. Working at Film House in Nashville as Creative Director of commercials – both radio and TV – for American Forces Radio & Television Services, he plays a role in every creative aspect.

He’s one of us – “I think radio’s the coolest medium on the planet,” he says without guile – still crazy after all these years. You can almost hear the goose bumps in his voice as he describes growing up on a farm outside Buffalo, NY, listening to the once-mighty WKBW roaring its 50,000 watts into the nighttime sky, and where he made his debut as a production intern. From there he moved on to Los Angeles, where he learned the game at KZLA, KRLA, KLSX, and KLAC, working with some of the top people in the business, and then to Premiere Radio Networks. The next step was to video, with Saban (“Power Rangers”) and Fox Family. It was a pivotal point, “when I first realized how crucial sound design was to the picture, and discovered the need for a healthy marriage between sound and picture.”

Then came the move to Film House, known for TV spots for radio stations. Moving to Nashville brought a slower way of life, though his inner gyroscope whizzed as always. And that’s when he began to notice it. Talent that “tried so very hard to impress the producer with big, elaborate demos,” but sometimes with very little skill to call upon once in the booth, and even less idea of how to comport themselves. Writing about auditions, he says, “Remember that you’re there to read a script – not plan your next Christmas party. You will likely be escorted into a voice booth and handed some headphones. The engineer will come in and adjust the height of the mic and copy stand, and you’ll be sweating profusely. If this is your first audition, your hands may be shaking a bit. This is really noticeable when you reach up to the copy stand and can be a bit unnerving. Take a deep breath and relax. You’re going to be fine. Rub your hands together or shake your arms to loosen up a bit.”

“If by chance you are introduced to the director, producer, client, etc., make it brief. Shake their hand if it’s extended (so long as yours isn’t clammy), introduce yourself and thank them for the opportunity to read for them. This is not an opportunity to tell them all about your years of experience doing summer stock. It’s also not the time to start chatting with the engineer about his or her gear and comparing it to this really cool mixer your friend found on eBay. You will not be impressing anyone. More likely you’ll be annoying the hell out of them and will be showing your lack of experience.”

Thanks – I needed that!

Filipiak writes in a voice that’s so casual, so conversational, that he sounds less like a credentialed, accomplished, award-winning heavyweight than like your best friend before you go out on a big date – “you’re not gonna wear those pants, are you?” But don’t make the mistake of equating “light tone” with “lightweight.” Even the nicest producer has a clock ticking in the back of his mind, and if you’re using too many of those ticks, you’re not helping. And you won’t get called back. Consider this book to be the self-help book equivalent of your buddy telling you you’ve got lettuce stuck in your teeth.

While we’re on his writing voice, there is one thing that might be distracting, particularly in earlier copies: dozens of typos and syntax errors – so many that, coupled with his off-the-cuff style, it’s not always readily apparent what he’s actually saying. Here’s how to work around it: read it less as a book than as a transcript of a conversation – after a while you’ll get into the flow. Filipiak says subsequent printings are being edited for nuts-and-bolts considerations like grammar and spelling, so don’t be put off.

One more thing you need to know as a radio guy looking to transition into voiceovers: producers don’t like you. Audition scripts usually have casting directions like “warm male voice, 30–45,” or “sarcastic, but with humor.” And one of the most common notes you’ll see is “no DJ types,” or words to that effect. While the bias may spring from the old “boss jock” days, Filipiak says, “you’d be surprised how many still sound like that. It’s subtle, but still noticeable. It’s a slickness that is difficult to overcome. The other problem is, after years of being on air, many jocks have trouble getting out of their “on-air” sound. There are exceptions of course and many on-air personalities make the transition without a problem. But a good number, no matter how hard they try, come off sappy when trying to read copy, and it tends to sound very regional or local. I would suggest that if an on-air personality is trying to break into commercial work that they focus their marketing on commercials they’ve voiced, not their on-air jobs. That’s a safe route to take and eliminates the red flag for any producer who may have a prejudice.”

See? Who’s your best friend in the business that you don’t even know? Yup – Bill Filipiak.

April 01, 2002 9570
by Steve Cunningham Throughout the many years I’ve recorded audio in the field, I have to say that I’ve never been completely happy with portable recorders. I’ve still got an expensive portable cassette recorder that I use for...
Read More...
© 1988 - 2023 Radio And Production, LLC
Go to Top