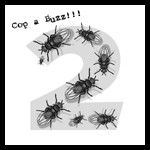 Production libraries are like cars – they can give you a great sense of power and control, while at the same time, have their little quirks. So it is with Flies 2.0 – not perfect, but mostly excellent.

But hey, we’re getting ahead of ourselves. Let’s just stroll onto the lot and kick the tires of this new eight-CD collection from AVDeli of Racine, WI (www.AVDeli.com). Yipes – already salespeople are swarming me like, uh, flies…and here’s their pitch:

I don’t know the difference between a “power breaker” and an “accent,” but that probably doesn’t matter a whole lot. The big question is, will Flies 2.0 work for you? There’s a good chance. Here’s what I found:

The sounds are aggressive and intrusive– not a wimp in the lot. Tracks contain up to five indexed cuts each, squishing lots of material into up to 99 tracks. The downside is that, if you’re like me, you may not have the patience to sit through multi-cut tracks – it’s quicker to just advance to the next track. Sooner or later, of course, you’re going to have to dig a little deeper, and Flies 2.0 pays off with some excellent zaps, stabs, and hits buried within its tracks. I especially liked the turntable and tape FX – building them from scratch is fun, but time-consuming. Letting Shakey take the time means I don’t have to. Kinda like having a chauffeur.

The Lord of the Flies

CDs are ok, but my Windows-based audio editing apps like wav files, so the first thing I do is rip the audio from the CD onto my hard drive. Then when I want to audition, all I have to do is to point and click. If you use Pro Tools, you can do the same.

I rarely use a cut as is, but instead break it down into percussive, rhythmic elements. Listen to this month’s Radio and Production CD for a brief example of blending Flies sounds with ACID loops. I started with some drum and bass samples. Then it was slice and dice time, which brings me to a challenge I’ve had with every other production library: how do I find what I’m looking for…if I don’t KNOW what I’m looking for? My fantasy is that somewhere, one of these CDs is holding the perfect sound for me. So I search and search…and search until I find something that works. Maybe it’s a “power breaker,” maybe it’s a “transition.” Is it the “perfect” cut? I won’t really know until I listen to over a thousand cuts, and that’s gonna take a while. But at the same time, it’s easier to find a good cut on Flies than most libraries I’ve played with. And hey, if you know a better way to find a cut, let me know.

Also, can I mention a couple of pet peeves? Clipping, for example. Flies 2.0 cuts are generally great, but a small percentage of source material smacks into the red, which can make for fatiguing audio. I’m told that they’re looking into identifying and rectifying the clipping issue. Oh, and just another beef: music beds that don’t end cold – that’s just not cool.

Flies’ eighth CD is named Voices 5, with over 400 “radical” drops that are all over the road in both content and audio quality. Corny retro 50’s, swishy gay stereotypes, babes in heat, two “no’s,” ten “okays,” fifteen “yeahs,” and eight “yeses” – you’ll find ‘em all. But wait! There’s more, including such all-time party favorites as “Get Up, Bitch,” “At Least He’s Wearing A Rubber,” “My Nipples Are At Attention,” and others you probably couldn’t use without running a test tone over them. Hey, given the proper context, any one of them could be dead-on, so knock yourself out. Just expect plenty of hum and tape hiss, and another thing that’s hard to fix: up-cut drops – Voices 5 is full of them. And I don’t know about you, but if I didn’t hear another Austin Powers drop for the rest of my life, it most likely wouldn’t cause me much of a problem – how ‘bout you?

Not me. Despite the minor flaws, in the end, Flies 2.0 provides a deep source of up-front, kick-ass elements that ought to keep you going for a long time. Your mileage may vary…but I got my money’s worth. Flies 2.0 is a buyout at the “online discount price” of $495.00. Visit www.avdeli.com for details.

February 01, 2007 9686
By Steve Cunningham While most of our voiceover sessions are simple affairs, elaborate dialog spots using multiple voices (and actors) can become complex. Different character’s lines may end up being recorded at different times...
Read More...
© 1988 - 2022 Radio And Production, LLC
Go to Top