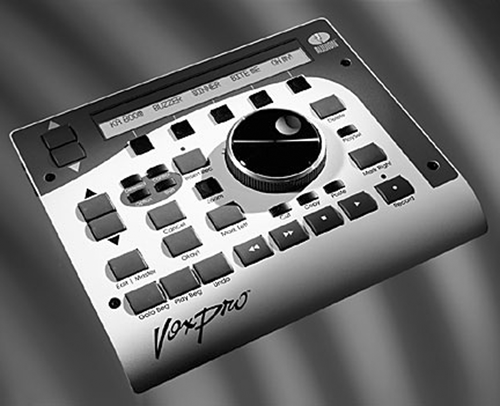 My review unit included the dedicated Control Panel for VoxPro PC, and I have to say that it’s well worth the added expense. Measuring about 8" x 10", it is dominated by a nicely-weighted jog/shuttle wheel. The outside ring shuttles when turned, causing the audio to play forward or backward with sound up to 2x play speed, and without sound moving faster than that. The jog wheel is much more precise for scrubbing, maxing out at 1x speed.

Below the wheel are three small editing buttons for Cut, Copy, and Paste, and the larger transport buttons. There’s a Mark In button to the left of the wheel, and a Mark Out to the right, both easy to find by feel. The Delete key is above the wheel on the right, and the Insert Record button is above and on the left.

The left side of the Control Panel is dedicated to navigation buttons, including Goto Beginning and Play from Beginning, as well as Up and Down buttons for moving through the on screen lists. Other buttons let you move your cursor between the Edit and Master lists and back, Undo your last edit, and Cancel or confirm an operation (what others label the Enter button is cleverly titled “Okay!” as in “alright already! I’m doing it!” — cute).

Along the top are five Hot Key buttons, and a backlit LCD display that shows the names of the current files assigned to each button. Any Edit can be assigned to a Hot Key by holding the Option button while pressing the desired Hot Key. The display immediately updates to show the file name. There are 26 banks of five Hot Keys each, and the banks are accessible by pressing the Up and Down buttons to the left of the display.

Assigning an Edit to a Hot Key automatically moves a copy of the file into the HotKeys folder. Selecting the HotKeys folder from the menu bar displays the list of current files assigned to HotKeys, along with their HotKey number from A1 to Z5.

The Control Panel features a GPI interface that controls Record, Stop, Play from Cue, and Play from Beginning. It also provides an optoisolated output for lighting an “on air” tally light. 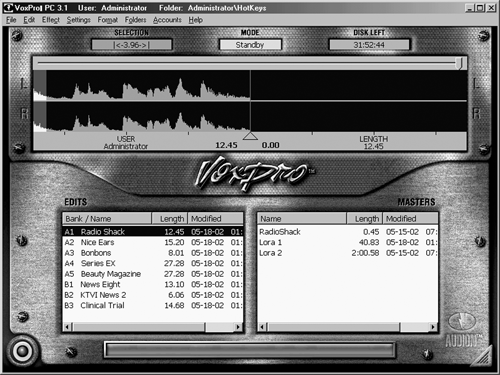 I had a chance to check out VoxPro’s networking capabilities at the studios of KIIS-FM/KHHT-FM in Burbank, CA. Brian Clark, CE of KHHT Hot92.3, says the studios now have a total of five VoxPro’s, with another couple planned. Hot92.3 currently has three client systems attached via Novell 100 BaseT network to a central server, while KISS has another two clients connected to a separate server. All the computers, including the servers, are Dell PCs running Windows 2000, with Pentium IIIs clocking around 500MHz and 256 MB of RAM and 80 GB IDE drives.

Audion’s networking scheme is simple but effective. You connect multiple client workstations to a central server, which acts as a repository for copies of any Master or Edit in a user’s Transfer folder, and for any audio in any Team’s folder. So morning DJ Sinbad can log in on a VoxPro PC in the News room and record his phone bits. If the News room is busy, Sinbad can log on in Studio 2 and access the same files from the server. Meanwhile his producer, who is logged on in another room and is working in the “Sinbad Morning Team” folders, sees the bits as they’re recorded, and they are ready for editing.

Brian demonstrated the robustness of the networking by playing files directly from another client VoxPro PC. Even though the documentation warns that this may cause some operations to be slow, I saw no difference between the responsiveness via the network versus locally. He also commented that even die-hard tape guys like Rick Dees have become fans of the VoxPro PC, which he says is much faster than other editors they’ve used. In fact, he has installed two VoxPro’s in Dees’ studio on his farm in Kentucky, so he can broadcast remotely using the same gear he uses when in LA. If the station decides to pop for a dedicated T1 line to Kentucky, it’s conceivable that Dees’ and his producer could collaborate on bits in near-real time.

Having used both PCs and Macs to cut sound for longer than I care to admit, I’m familiar with the certain computer “feel” that most workstation programs exhibit. It’s not just the whole mouse and keyboard thing that makes them feel like something other than 1/4" two track tape. No, I think it has more to do with the general “fiddly-ness” of computer workstations, where you have to futz around to find a menu or a button to get what you want. And although modern workstations are fast compared to “old skool” editors, you still have to wait here and there, even if only for a second or so.

VoxPro PC also feels a bit like a computer when I’m double-clicking the program icon to start it, and when I’m logging in and typing a password. But as soon as that main screen comes up and the Control Panel comes completely to life... aaaah. I’m back in the warm and fuzzy world of oxide and razor blades. Fast, fast, fast, with no hint of computer fiddly-ness.

I think that’s one of the things I like best about this unit — it feels more like tape than does any other workstation I’ve put my hands on in recent memory. The closest thing to it for feel is Orban’s Audicy, but even that box is not as responsive as VoxPro. It’s just plain quick, especially on a fast PC. The Control Panel is rock solid, and the wheel is nicely responsive. The fidelity during scrubbing is quite good, and it feels like my old Ampex. I like it.

VoxPro PC excels at recording and cutting voice tracks, especially with the Control Panel. I didn’t have to think about preparing for the next take, because pressing Record automatically generates a new Master. I only used the keyboard for titling, and once logged in I found myself using the mouse only to change folders and access the Settings menu. This is a great unit for the computer-phobic tape maven, and I found it to be a lot faster to use than Sound Forge or Cool Edit 2000. Sure, there’s no time compression or limiting, but who cares? When I have less than an hour to crank a dozen dry liners and get ‘em onto the Internet, who cares about parametric EQ?

My hat’s off to Audion Labs for making a great product and for taking good care of its customers. This one’s a winner, and Steve sez check it out.

VoxPro PC with the Control Panel has a suggested list price of $2499. A version with the software only lists for $1299, and you can add the Panel later for an additional $1299. For more information or to download a demo, visit www.audionlabs.com. Special thanks to Mark Haberl at Audion Labs for exemplary tech support, and to Brian Clark at KISS/KHHT in Los Angeles for the tour of his networked setup.

February 01, 1997 10165
by Jerry Vigil DAT is alive and well. This format remains an affordable and reliable way to record, master, and archive digital audio. As the years pass, manufacturers continue to serve up decks with new features and...
Read More...
© 1988 - 2022 Radio And Production, LLC
Go to Top