For most of us, Sonic Foundry’s Sound Forge needs no introduction. In addition to being the company’s flagship audio product, Sound Forge has been one of the most popular stereo editors on the Wintel platform for several years. Personally, I thought Forge was pretty much complete. While it wasn’t the fastest stereo editor in my arsenal, it did nearly everything well.

With the introduction of version 6.0, this well-known audio editor now sports several worthwhile new features, nearly all of which simply make Forge work faster. Most importantly, it now implements full non-destructive editing and does so in RAM, so editing operations are now lightning-fast. 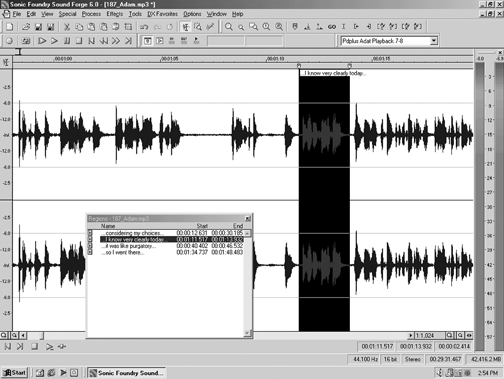 DON’T CRUSH THAT AUDIO, HAND ME THE PLIERS

Non-destructive editing basically means that you can edit your audio file as you like, while the original recording remains untouched on the hard disk until you save (or in Forge-speak, “render”) to disk. For example, when you delete a part of the audio, the program sets pointers at the beginning and end of the deleted section. On playback the program skips over that section, but it’s still there on the disk. The to be deleted section is not actually deleted. This makes Undo operations much more flexible — Forge offers an unlimited number of undo’s, with the caveat that undo files take up disk space, so if you run out of space then you’ll not be able to further edit your recording.

There’s an additional benefit here. By taking this approach, Sound Forge performs edits noticeably faster than earlier versions. Since the program now simply writes these little pointers to the disk file instead of re-writing parts of the original audio itself, it’s far more responsive. The previous release of Forge (version 5) was reasonably quick, but deleting sections of a long recording caused a noticeable pause, while the program wrote a new audio file and re-built the waveform display. Version 6 just does the cut and is immediately ready to go again.

In fairness, there are several other editors on the market that perform non-destructive editing and are equally as quick, notably CoolEdit and ProTools. But given Forge’s popularity, this is a welcome addition indeed and makes the program far more useful in a pressurized production environment. A quick look at the comparison between Forge 5 and Forge 6 from Sonic Foundry’s website will give you an idea of what to expect. While I didn’t put a stopwatch to the editing functions while preparing this review, I can tell you that those numbers look reasonable against what I observed while editing in Forge 6.

The main screen in Forge 6 looks pretty much the same, as did Forge 5. Most of the improvements in the interface are not obvious until you begin to use the editor to do real work. For example, sample-accurate editing is now supported with the enhanced Time Zoom feature and the ability to snap to a specific sample. You can make the Zoom ratio up to 24:1, which sets 24 pixels equal to one sample, and a menu command snaps the cursor to the nearest sample. There’s also a window where you can set two custom zoom ratios, and you can switch between them quickly with just a mouse click.

But if you’re a current Sound Forge user you’ll feel right at home. The main menus have hardly changed, and the key combinations you’ve memorized are all still valid.

August 01, 2000 13062
by Steve Cunningham When Alesis first announced its MasterLink product in June 1999, they promised that it would change forever the way records are mastered. I don’t know about that, but having spent a few weeks with the...
Read More...
© 1988 - 2023 Radio And Production, LLC
Go to Top