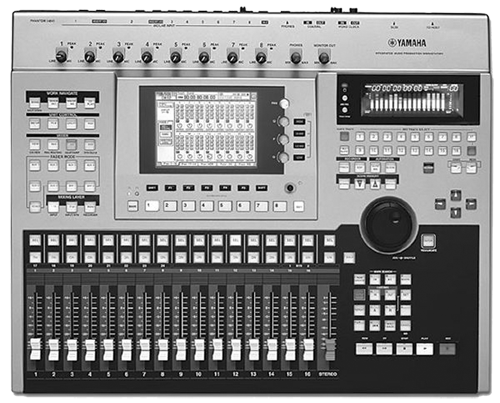 All-in-one hardware audio workstations are popular among small recording studios, production companies, and bedroom musicians. They’re also used by some radio production types who like to work at home, after hours. Welcome to the club, all ye who have no life.

Yamaha has presented us with yet another tool to ensure we continue to have no life, in their AW4416 Audio Workstation. The AW4416 combines a 44-channel digital mixer with EQ and dynamics on every channel, and a 16-track digital recorder with editing and the ability to record on all sixteen tracks simultaneously.

The AW4416 records 16- or 24-bit uncompressed audio at 44.1 or 48 kHz. You get stereo digital input and output, built-in SCSI for backup, dynamic and scene automation, motorized faders, and sixteen handy sampling buttons for triggering effects or parts of recorded tracks. There’s plenty of processing power, including two onboard multi-effects processors and 4-band parametric EQ and dynamics processing on each channel. A CD-RW drive fills a slot in the front of the unit so you can generate an audio CD without leaving your desk.

But life is not all beer-and-skittles with the AW4416. There are annoyances and some weaknesses to this box, especially in the editing department, as we shall see.

OUT OF THE BOX

For a small package, the AW4416’s appearance is impressive. Banks of lighted buttons and knobs are spread across the surface of an attractive silver wedge. A soft rubberized mat surrounds the faders and transport controls. Labeling is clear and easy on the eyes. Everything feels solid, too; the buttons offer a reassuring resistance, the switches emit a satisfying click, and the knobs appear robust. The seventeen moving faders (16 channels plus stereo master) are short at 60mm each, but feel smooth and positive.

There’s lots of other stuff in the box, including four manuals, a video, AC cable, a demo CD, along with an internal CD burner and a box containing a 2.5" 12GB hard disk. Hmmm. I got the feeling I’d need tools soon, and I was right.

If you’ve read my reviews in the past, then you know that I like to open the box, plug in the unit and turn it on, and begin fiddling around right away. I did this, and then realized when I got an error message that there was no hard disk in the unit. I then noticed that Yamaha taped a note on the inner box, the second page of which warned of disaster if I powered up before installing the hard drive. No disaster occurred, but I don’t understand why Yamaha shipped the unit without drives installed. Installing the drive and the CD-RW burner was not too much of a challenge, but it was an annoying twenty-minute detour. Those of you who are easily intimidated by handling static-sensitive devices should give the job to a tech.

There are eight analog inputs in the AW4416. Inputs 1 and 2 on the rear-panel jackfield sport both XLR and TRS connectors with insert points. The remaining inputs just have TRS jacks, but their levels range from -46 to +4 dB, still good enough to function as mic preamps. (Yamaha used TRS jacks to save space.) This arrangement works if you have a patch bay and the necessary cables, but I’d hoped for the option of plugging all my mic cables directly in to the AW4416. However, the layout is common on these combo boxes so I wasn’t too disappointed.

All channels feature dedicated trim pots and peak LEDs on the top panel. A rear-mounted switch handles phantom power for inputs 1 and 2, but I wish there was a status LED to tell me if phantom was on.

Input-channel 8 has a second unbalanced 1/4-inch jack for electric guitars, basses, and other electric instruments. I checked this out right away. I plugged in my trusty Rickenbacker 330 and inserted an amp-simulation effect from one of the onboard processors. The quick-and-dirty crunch sounded pretty good, though it wouldn’t fool a purist.

Directly below the inputs is a pair of RCA tape-out jacks, four unbalanced 1/4-inch Omni assignable outputs, and a pair of +4 dBu balanced TRS monitor outs. Why does Yamaha use both balanced and unbalanced connections? Again, it’s common in a product intended for both pro and consumer markets.

Rounding out the rear panel are two option slots for adding more I/O, a stereo headphone jack, S/PDIF in and out, word clock in and out, jacks for a footswitch and a 9-pin mouse, a serial connection for a pre-USB Mac or a PC, and a SCSI port. There’s also a trio of MIDI jacks.

As we’ll see, you can directly tap any channel signal and send it virtually anywhere in the recorder, or route any of 50 different signals to the mixer’s four Omni outputs. The AW4416 has a full-blown digital patchbay under the hood — a good thing, considering how many channels of digital audio can flow through the AW4416 at any given moment.

You can mix and match formats in the slot cards as well. For example, you could add one card for ADAT lightpipe digital I/O, and pick up an additional eight TRS analog inputs from a second card in the other slot.