The quickest way to operate the RADAR 24 is from a dedicated remote panel, the Session Controller, which has the transport controls, track arming buttons, scrub wheel, editing controls, and many other functions directly accessed from the keys. The QWERTY keyboard is only there for naming projects and locators, and in a way it’s a shame it takes up so much space. Its dominance of the control surface suggests that operating the system is more complex and computer-like than it actually is. This machine is actually very simple.

Above the keyboard, a bank of keys brings some commonly used menu options to the fore, and there are a few extra keys for even more. A 24-track meter bridge is optional, but it makes the whole system complete and self-sufficient, especially when it’s mounted to the back of the remote. There is also an LCD display screen, which displays the current location, locate points, and various menus. The controller is small enough to be mounted on a small stand, which makes it look even more like a tape machine remote.

All the expected functions are here on the Session Controller. The transport controls are small but clear and illuminated, and they help add to the familiarity. The fast-forward and rewind speeds are adjustable, and a double-push on the buttons moves the audio at three times the set speed. This kind of programmability extends to the initiation of record, which can be set to be either a single push on the record button or a 2-button operation like most tape machines. Since the record button has no protective fence around it, this sounds a little alarming until you remember one of the features made possible by the hard disk approach — UNDO. A major point in favor of hard disk over tape is the ability to undo what you have done, whether by accident or design, and RADAR has up to 99 levels of UNDO. This would allow an accidental recording to be deleted and the original restored, and also allows overdubs to be carried out on the same track without losing the previous version — if the new one is no better it can be thrown away and back comes the first one. The undo function applies equally to the machine’s editing functions.

There’s a whole bank of keys dedicated to the editing features, and the operation centers on two keys to Mark the In and Out points. These select points for automatic punching when that’s needed, and also select a range of audio that will have other editing operations applied to it. The points can be entered on the fly or numerically, and in this context it is worth noting that the time display can operate in bars and beats, given a tempo map and a start point. It also offers SMPTE frames, or film-style feet and frames, in addition to the conventional time readout.

For precise location of the required points there is a jog and shuttle wheel, which provides an excellent emulation of analog tape rock and rolling, with a directness in the wheel’s action that makes its use positive and reassuring. This is not a double-function wheel as with video decks and the like, with a push-button action to switch between jog and shuttle. What it does is determined by which key is pressed before you grab it. This also means it is not live all the time but must be selected before use. There’s also an on-board solo function, which allows any selection of tracks to be soloed to help identify edit points and problems. 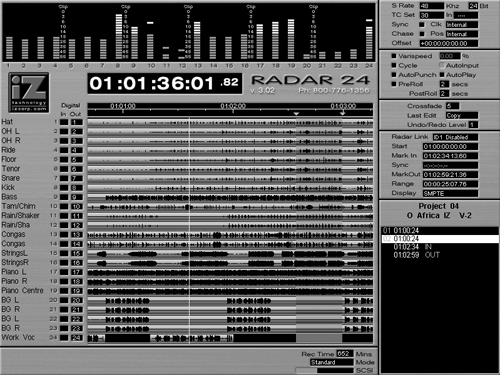