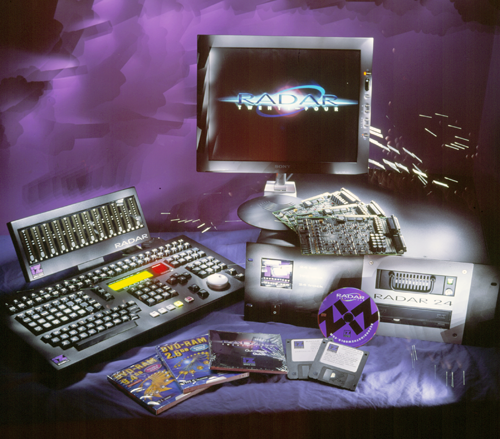 Okay, a quick show of hands, please: how many of you have butt-spliced a 2" 24-track master tape? I thought so... a bunch of fellow old guys! Nevertheless, it would seem that one of the goals of every workstation company is to produce a product that feels and works just like a tape recorder. After all, most of us over the age of 25 are still quite comfortable with tape recorders, even if we haven’t spliced 2" tape recently.

iZ Technology, a small company in Vancouver, has been producing workstations that masquerade as tape recorders since 1994. You may be familiar with these products as Otari’s RADAR and RADAR II systems, which were actually designed and built by iZ. Last year iZ re-acquired the distribution rights for RADAR, and has since introduced a 24-bit version into the product line, cleverly named RADAR 24.

RADAR stands for Random Access Digital Audio Recorder, and what sets it apart from most hard-disk-based systems is its determination to behave like a tape machine. Although there is a PC motherboard inside the box, it doesn’t feel like a computer running recording software. It feels like a tape recorder and happens to look a little bit like a computer. While this idea has made further appearances since, with hard disk 8-track recorders from the likes of Roland and Akai, RADAR is one of the only ones to provide the tapeless equivalent of a 24-track tape recorder in a single box.

The RADAR 24 system is a serious piece of hardware whose only resemblance to a computer is evident in the rackmounted CPU unit. The front of the CPU is home to the power switch, a big blue iZ logo, a 3 1/2" floppy drive, and a beige panel that contains two media bays. The first holds a single removable SCSI drive, available in 18GB and 36GB versions with 18GB as standard equipment. The second bay is for a built-in backup device, which can be either a DVD RAM drive or one of three Exabyte tape drives. The floppy drive is for software upgrades, and the software itself is kept on a small internal hard drive within the CPU.

The chrome-plated rear panel of the RADAR 24’s CPU is covered with gozintas and gozoutas, demonstrating the unit’s potential for interfacing with almost anything. Standard equipment includes two-channel AES and S/PDIF digital ins and outs, and 24 channels of TDIF on three DB-25 connectors. However, analog inputs and outputs are optional, as detailed below. Also standard is MIDI, word clock, time code, and Sony 9-pin serial control.

The rear panel also confirms the system’s computer origins, with 5 slots that hold various I/O cards. These include one for the SCSI bus, which appears on the back for the purpose of connecting additional drives, and you can record across these seamlessly. Other cards include Ethernet for connecting up to seven additional RADAR 24’s to the first, USB, an input for an optional keyboard controller, and a VGA output that lets you display detailed graphical waveforms, meters, and other parameters on an external VGA monitor. The external monitor is very nice, but technically, it’s not necessary to operate the system.

RADAR offers a whole slew of options for audio I/O, with the philosophy that there is no need to buy features that you won’t need. There’s space below the TDIF connectors for an optional 24 channels of either AES or ADAT digital I/O. 24 channels of analog +4 audio I/O is also optional, again on DB-25 connectors. The analog card is available in three flavors, all of which can operate at either 16 or 24-bits: the Classic tops out at 48kHz, the Nyquist goes to 96kHz, and the S-Nyquist can sample at up to 192kHz. When recording at 96kHz the track count drops to 12, and at 192kHz it drops to six tracks, but this is how all hard disk recorders accomplish the task of high-rate sampling.

There are so many connectors crammed into the available real estate on the back that all audio I/O is on DB-25 connectors (excepting the optical ADAT option), so you’re going to need some looms to connect them. Both analog and digital signal connectors are wired to conform to the Tascam standard, so a RADAR box can be hooked directly into a studio already wired for DA88s. Any pair of tracks can be assigned to the two-channel AES-EBU and S/PDIF connectors, and signals coming in on these can be routed to any two of RADAR’s 24 tracks.

July 01, 2003 6323
by Steve Cunningham Left to my own devices for this month’s product review, I found myself compelled to look at a software plug-in whose sole purpose is to twist, mangle and otherwise brutalize audio. While this plug includes...
Read More...
© 1988 - 2023 Radio And Production, LLC
Go to Top