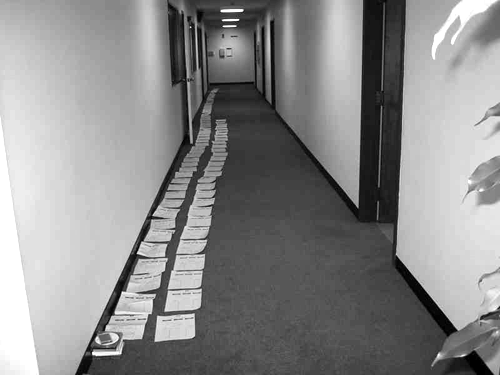 Even in our radio world of communication-oriented tasks, there is little communication between people who are vying for our time in production. For example, a salesperson dropping something off at the 11th hour is unaware or doesn’t care about whether or not someone else is doing the same thing at the same time. They all pretty much have their own agenda.

When one “emergency” arises, it’s to be expected and is easily handled. When everyone is doing it, bedlam results. The key is a Continuity and Traffic department that is backed by management in their deadline enforcement. You can bet that if a salesperson knows they won’t get on the air after a certain time, that it won’t happen to them more than once. When the opposite is true, human nature being what it is, you know the result that is commonplace.

The idea management is more prone to be sympathetic to is the when everyone else who played by the rules gets short-sheeted. There is only a given amount of time in any day or shift. When you jeopardize other accounts and cause quality compromises, it affects the entire air sound and invites errors.

Everything is a flow-through, "trickle down” pressure cooker. Nobody wants to turn money away, so there is a tendency for things to be accepted at the last minute.

In an atmosphere that lacks the ideal conditions, one solution is to alter the shifts so someone works later, eliminating the rush and possible errors. It would also ease the crunch on production studios by spreading the work over more hours. Kills two birds.

Every situation is different; there’s no “book” on this that covers all. Some situations are governed by a union, where some shifts will not be covered by a person who can also voice. In still other situations, everyone on staff may have full capability of voice and production skills.

The common element that can be solution-oriented in both cases is an empowered gatekeeper who is in the flow, like Traffic or Continuity. Otherwise, you simply end up with someone in another department who is just a veto-power or approver, thus inviting politics and finger-pointing at every instance that surfaces on a daily basis, causing repetitive meetings resulting in even more wasted, non-productive time.

Come up with policy, communicate it, enforce it. List those who have “too many emergencies” and hold them accountable for having their “flat tire” in the middle of rush hour. And if the culprit is a top-producer salesperson, that justifies an assistant.

Common sense, teamwork, and courtesy go a long way to weave all this together. It starts at the top.