In this era of specialized music formats when rock radio can mean 10 or more different genres, and country radio not far behind, having a production library that can work in virtually any format is nearly impossible. Yet, 615 Music Library seems to fit that bill. Offering two separate libraries, the Gold and Platinum Series, there’s a wealth of styles available. Everything from all the different styles of rock and country to jazz, big band swing, children’s music, New Age, and more are represented. They also offer custom music creation, jingles, promos, and music beds, for station imaging or client use. 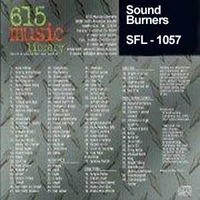 The Gold Series offers over 50 CDs of music and production elements, and the Platinum Series currently has 25 CDs. Updates occur quarterly with 3 to 6 new CDs released in each quarter period. For this review, I was furnished with Sound Burners Volumes 1, 2, & 3 and Toolbox Volume 1. These are production element CDs from the Platinum Series. I also auditioned some tracks on their website, more on that shortly. 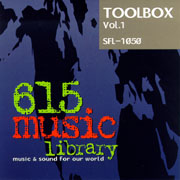 The hallmark of any good sweeper package is that when you listen to the disc for the first time, you should almost immediately get ideas of where you would use the sweepers. I had a lot of that while listening to the discs—great sweeper beds, especially good for those of you who are always getting bugged by the disk jockeys at your station for “some music I can talk over, dude.” Give them one of these discs, and they’ll shut up in a hurry.

615 Music Library has one of the better websites out there, with loads of helpful information, including a complete catalog list. You can also download Windows Media Player auditions of each track on each disc, as well as samples of their custom music packages. In addition to the format-specific music discs, they also offer some discs that are mood-specific. Titles like “Firestorm,” “Brooding Darkness,” “Escape Velocity,” and “Mystic Rain” give you an instant idea of what to expect on each disc—very helpful for panic searches so common on Friday afternoons.

The music on each CD sounds like people who are well versed in that particular genre wrote it. For example, listening to the audition downloads from the “Jumpin’ Jivin’ Swingin’” CD makes one think Louis Prima and the Witnesses got back together again. Meanwhile, “Happy Trails” sounds like it came right out of an old singing cowboy movie.

I like a library with lots of variety, and this one certainly has it. Each track features full instrument renditions with solid musicianship, not just a guy with a Casio keyboard and a boom box (something I loathe about certain libraries I’ve heard over the years). All tracks are well balanced and have just the right amount of reverb in the mix, not overpowering, but enough to enhance the sound properly. Nothing cheesy at all, except when cheesiness was the goal, and even then the cheesiness sounds classy.

There’s information on their website for ordering and licensing. Mostly it’s blanket style agreements and needle-drops. From what I can see, they will let you pick and chose specific titles from the Gold or Platinum Series for your library. There doesn’t appear to be any barter offering, but I’ve had problems with barter clearance at stations I’ve worked for currently, and in the past, so not having barter may not be such a bad thing.

If you already have a library that is primarily format specific to your station, 615 Music would make a great supplemental library, but it can easily fit the bill for a station that can only have one library due to budgeting. With over 75 discs currently, and updates on the way, you’ll have enough music to supply any job you have in any situation. To me, no matter what format your station is, the more variety there is in a music library, the more chances of creativity you’ll have. 615 Music Library is one great package, and definitely worth considering. For more information call 1-888-615-TRAX, or check out the highly useful website at www.615music.com.

May 01, 2013 11700
by Jerry Vigil With all the multi-effects processors and multi-dynamics processors on the market, it's difficult sometimes to find one good piece of gear that will handle one small but important task for you. If that task calls...
Read More...
© 1988 - 2023 Radio And Production, LLC
Go to Top