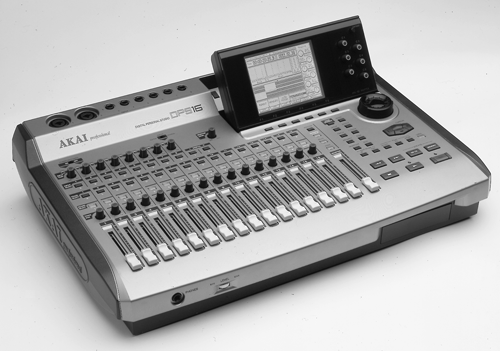 The first of the new 24-bit, 96 kHz digital audio recorders are now upon us. Akai’s latest entry in the 24/96 category is their DPS16 Digital Personal Studio. Although it’s primarily designed for project studios, the DPS16 has the features needed for producing spots, liners, and promos in a small and inexpensive package. It’s laid out like their DPS12, but on steroids, and the interface is much more direct.

The DPS16 is a 16-track random access hard disk recorder and editor that records linear digital audio at either 16- or 24-bit resolution, at sampling rates of 32, 44.1, 48, and 96 kHz. To ensure lots of digital headroom, all internal data paths in the DPS16 are 56-bits wide, to handle 24-bit audio cleanly. It comes standard with a 10 GB IDE hard disk built-in, and a SCSI connector for adding external hard disks.

It also has a 26 channel digital mixer with scene memory, three-band digital EQ on every channel, and a built-in four-channel effects processor with lots of presets. There are also four aux busses that can be routed to the internal effects processor or out the back to external processors.

All this digital processing is housed in a silver package with a large backlit LCD display that tilts for easy viewing. The unit is about 19" wide, so it takes up very little desk space.

The DPS16’s front panel is definitely where the action is, starting with the backlit LCD display. It’s big, informative, and easy to see thanks to the tilt feature and to the contrast control. Below the display are six soft keys whose functions change depending on what you’re doing. To the right of the display are six soft knobs (Q-Link knobs) that provide real time control over channel EQ, aux send levels, or effects parameters. Below the soft keys are a series of Mode buttons that let you access record, edit, mix, and effects functions with a single button press.

Akai calls this interface Q-Link Navigation. They’ve designed it such that you’re never more than one button away from any major function. The soft keys’ labels change according to the Mode buttons, and it all works together to make the DPS16 easy to get around on. That’s a good thing, because the pre-release unit I had came without a manual. But so far I haven’t needed a manual, which says a lot for the straightforward operation of the DPS16.

There’s a jog/shuttle knob that comes in the familiar ring and center-wheel configuration, and below that is a cursor control for tabbing through the fields on the screen. Below that are six buttons that assign Edit In and Out points, and that play between, to, and from the In and Out points.

Rounding out the right side is a full set of transport controls, including MEMORY and GOTO buttons which set and recall locate points, respectively. You can program up to 100 locate points within a single recording, and can even name them.

The left and center of the front panel is dominated by the 16 100mm faders and their associated panpots. Next in line are the RECORD SELECT buttons, the TRACK SELECT buttons, and the INPUT SELECT buttons. At the top are the eight balanced analog inputs, two of which are on Combo jacks that accept either XLRs or 1/4" phone plugs and feature mic preamps with phantom power. Input number eight can be switched to handle a low impedance source like electric guitar or bass, and all eight analog inputs have 24-bit converters. If you use the two channels of digital input on the back panel, you can record up to ten channels in one pass.