Technology: Expanding Your Workstation With Plug-ins

Just as no production room is complete without its outboard processors, no digital audio workstation is complete without the “plug-ins” that add signal processing features. In fact, one of the best reasons to use a computer-based audio editor instead of a dedicated hardware editor is that you can add features by adding plug-ins. Almost any sort of effect or processor you can imagine, from reverbs and compressors to EQ and flangers, is available as a little file that goes in a folder labeled “Plug-ins.” Best of all, many plug-ins are available on the Internet for free or for a small shareware fee.

Plug-ins are discrete software modules that operate from within a host application. The plug-in concept is widely used in software engineering to customize and extend the capabilities of host software. There are now hundreds of audio plug-ins available from dozens of vendors, covering processing tasks ranging from the essential to the truly weird.

Most workstation software includes a healthy number of plug-ins as standard equipment. For example, Syntrillium Software’s Cool Edit Pro ships with about forty plug-ins. But hey, more is more, right? Read on to find out how to add even more processing to your workstation. 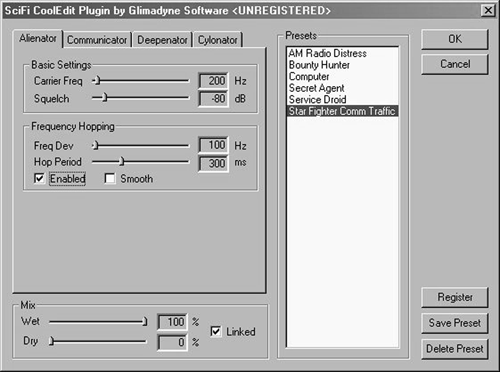 Audio plug-ins come in several different formats, which unfortunately are incompatible with one another. The format that will work with your workstation depends on your computer platform, and which format your editing software supports. Trying to figure out which formats work in which environments can be confusing. There are no plug-in “standards” in the sense of specifications that are formally recognized by standards-setting bodies such as ANSI or IEC, or even recognized within the audio industry by AES or SMPTE. Instead, plug-in formats are defined by the API (Application Programming Interface) that allows a given plug-in to work with the host application. A plug-in designed to work with a given API should work within any host application supporting that API. 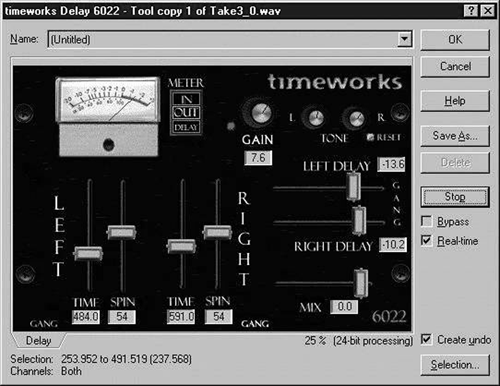 The biggest distinction among various plug-in formats is whether the software algorithms that do the processing are designed to run on dedicated DSP chips or to run “native,” using the host computer’s CPU. The original SD II plug-ins ran on the Motorola DSP chip on Digidesign’s Audiomedia II and earlier versions of Pro Tools cards. In 1994, Digidesign carried the idea further with TDM (Time Division Multiplexing), creating a processing buss similar to the effects send and receive busses used in consoles.

Digidesign’s top-of-the-line TDM workstation, Mix 24 Plus — available for both Mac and Windows NT operating systems — now ships with a total of 12 DSP chips; users may add more DSP power with optional DSP Farm (as in “grow your own effects”) cards. In addition to Pro Tools software, TDM plug-ins can also be used with Digital Performer, Logic Audio, and other TDM-capable host applications. Even if you use one of these programs, you’ll still need a relatively expensive TDM-equipped version of Pro Tools hardware.

The bulk of TDM plug-ins come from third-party developers, many of whom — attracted by Digidesign’s huge market share — got in the game years ago. Digidesign’s stable of TDM developers now includes high-profile companies that made their names building rack gear, including Aphex, Dolby, Focusrite, Lexicon, and TC Electronics (now marketing plug-ins as TC Works).

Yamaha’s popular DSP Factory mixing card offers software control of a hardware mixer, and the mixer can be accessed from within programs such as Logic, Cubase, MixTest, and others. But the effects offered by the mixer are not technically plug-ins: They’re fixed algorithms that are part of the mixer’s hardware. Third party developers cannot write software that directly alters the functionality of the DSP Factory’s effects. 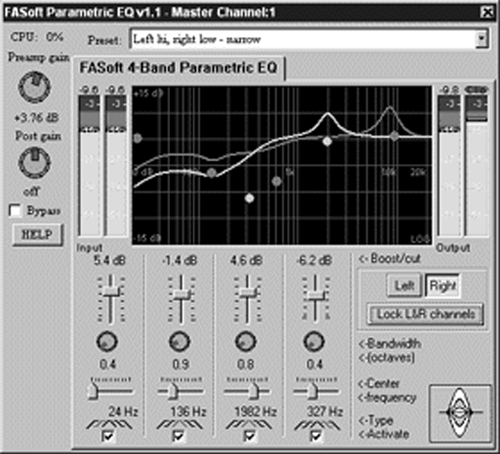 The Adobe Premiere format has long been popular for native processing on MacOS machines, and is supported in programs such as BIAS Peak, Emagic Logic Audio, and BIAS Deck. But today the most widely used native format is Steinberg’s VST, which is supported on the Mac side not only by Cubase but also Emagic’s Logic Audio, TC|Works Spark, and the current version of Peak. On the PC side, VST is supported by IQS’s SAW-series and several others. In fact, according to Steinberg, there are over 300 VST plug-ins available today for Mac and PC workstations. VST is currently available for Power Macintosh, Windows 95/98 and NT 4.0. You can get more general information on VST at Steinberg’s website <http://www.steinberg.net/>, where you can also check out nearly two dozen of Steinberg’s commercial plug-in offerings.

As a proprietary format on the Mac, Mark of the Unicorn’s MAS format is currently supported mainly by MOTU’s own Digital Performer. Digidesign, meanwhile, has two proprietary native formats: AudioSuite (for off-line processing of files) and the new RTAS. RTAS gives users of Pro Tools 5 LE (the 001 version of Pro Tools) a host-based solution that boasts some of the same real-time functionality and automation found on TDM systems at a fraction of the cost. Emagic’s Logic Audio series comes with an arsenal of proprietary plug-ins that can be used alongside VST effects within Logic. Unfortunately, the Logic plug-ins cannot be ported over to other VST compatible software.

The Windows situation is somewhat less complicated, with both VST and DirectX being popular alternatives. DirectX is the Microsoft Plug-In architecture in Windows, so any Windows application supporting DirectX is able to host DirectX Plug-Ins <http://www.microsoft.com/directx>. It’s supported by a wide variety of host software, including the popular Sonic Foundry products such as Sound Forge and Acid, Cakewalk, and Syntrillium’s Cool Edit Pro.

Microsoft has recently released DirectX 8.0, which runs on Windows 95 (all versions), Windows 98, Windows 98 Second Edition, Windows Millennium Edition, Windows 2000 Professional and Server. Microsoft says that Windows NT 4.0 is supported with an earlier version of DirectX, and you can get more information at <http://www.microsoft.com/directx/homeuser/faq.asp>. 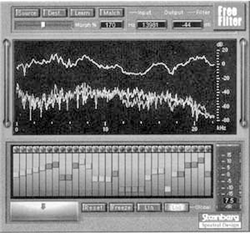 ARE WE IN REAL TIME HERE?

Most of today’s popular plug-in formats support realtime processing on playback. You can change the effect as the audio plays; the original audio file is untouched. On the other hand, file-based plug-in formats actually process the audio files themselves. When you apply a file-based plug-in, you are altering the original audio permanently (or if you’re smart and cautious, creating a completely new audio file). The most popular file-based formats in use these days are Premiere and AudioSuite. Most real-time plug-in formats can also function in file-based mode: Once you decide you like the sound of a realtime effect, you can “print it to disk,” thus freeing up processor resources for additional effects.

Although the file-based approach may be appropriate for tasks such as converting material to a different file format, it’s generally less practical and intuitive than realtime. In most cases, you must set parameters while listening to a small “preview” section of the file, which doesn’t allow you to get the full flavor of the track as you tweak the settings. And since the entire file is processed, waiting for results can be time-consuming. Also, a momentary lapse in good backup procedure can make it difficult or impossible to undo your processing decisions later. Still, if you have an older (and slower) computer, file-based plug-ins may be your best option. But all else being equal, a realtime format such as VST, MAS, or RTAS delivers faster and more flexible results.

FREEBIES AND NEAR FREEBIES

While commercial plug-ins are wonderful and usually well-worth their cost, there are many freeware and shareware plug-ins available on the Internet that are comparable to their commercial cousins. Better yet, they’re cheap! Some are outright giveaways, some are shareware, and some are time-limited demos that will allow you to try them for a period of time before they stop functioning.

For DirectX plugs, check out the oddly-named DaveCentral website <http://www.davecentral.com/audplug.html>. There you’ll find over 40 links to free or inexpensive audio plug-ins, including the DirectX plugs shown in this article. For a more platform-neutral plug-in site, try Shareware Music Machines’ plug-in page <http://www.hitsquad.com/smm/cat/PLUG-INS/>, where you’ll find links to literally hundreds of free, shareware, and commercial plug-ins for Mac, PC, and even Linux platforms.

For VST-format PC plug-ins, check out the Digital Sound Page <http://www.xs4all.nl/~rexbo/pc_plugs.htm>. And for another platform-neutral VST site, go to the plug-in section of the Cubase FAQ <http://www.CubaseFAQ.com/links/plugin.htm>. This page has dozens of links to both free and commercial VST plug-ins for Mac and PC.

So fire up your browser, lean back, and surf! Pick your plug-in format, and add reverb, noise reduction, or a bodacious ring modulator to your computer workstation with a few clicks of the mouse.