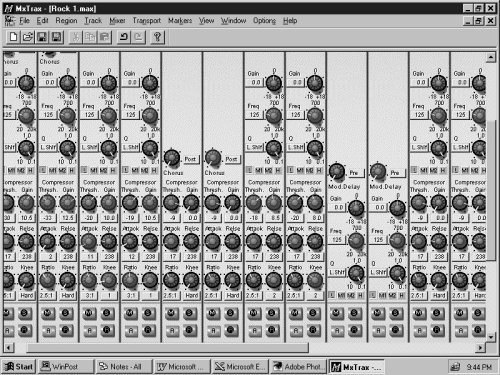 Build Your Own Mixer

MxTrax has two main screens, the Mixer Window and the Track Window. Each can be viewed individually, and there’s a split screen mode for viewing both simultaneously with the Track Window at the top and the Mixer at the bottom.

One thing I like in DAW software for the PC is the ability to create your own mixer from scratch. MxTrax lets you do this, and it is surprisingly easy to do. The Component Toolbox toolbar contains icons for each of the components that can be used to build a mixer. Adding components is a simple click and drag from the Toolbox to the Mixer Window. Items on the Component Toolbox include Input Fader, Output Fader, Pan, EQ, Aux Send/Return Control, Channel Name, Mute/Solo/Automation/Record Buttons, Dynamics Processor, Attenuator, Phase Inverter, Delay, Effects Return, and a selection of horizontal and vertical spacers to make your mixer pleasing to the eye.

Each input and output fader comes complete with its own level meter, which can also be set to monitor dynamics or both. Below the fader, a label shows what that fader is assigned to. The first Output Fader dragged to the mixer screen automatically becomes the Stereo Master fader and is pre-assigned to the stereo bus. Output Faders added after this are mono, unassigned faders. When EQ is dragged to a channel, a 4-band parametric EQ appears. All four bands are peaking with Low Shelf and HPF options for the first band and High Shelf and LPF options for the fourth band. You get 18dB of cut/boost with Frequency and Q controls. Aux Sends offer pre/post operation and can be used to send a channel’s input to an effects bus to access the internal effects. Or its output can be assigned to one of the outputs on the optional AX44 breakout box to enable using external effects boxes. The external effects can then be fed back into the mix directly from the AX44 inputs to the MxTrax mixer.

The Channel Name component is a simple text tool used to name channels. The Mute/Solo/Automation/Record component installs four buttons on the mixer channel. The Mute and Solo buttons function as you’d expect. Record sets that channel ready for recording, and the Automation button engages the MxTrax’s easy-to-use mixer automation. Most mixer controls and even effect parameters can be automated. If you’ve ever played around with automating effect parameters, you know how much fun this is. It’s easy to create a mix that contains lots of rapid, wild changes. Just record the changes one at a time as you play back the mix (in Automation Update Mode). It’s like having an unlimited number of hands to control all the parameters in a mix.

When the Dynamics component is added to a channel, you get a choice of processor types: Compressor, Expander, Compander (Hard), Compander (Soft), Gate, and Ducking. Controls for Attack, Release, Threshold, Gain, Ratio and more (depending on which type is selected) appear on the channel strip. It’s easy to glance at the dynamics section of your mixer and see what’s what without having to “open” the dynamics section to look at it. Adjusting dynamics processing is a click-drag away.

The Delay component is not what you might first expect. This component is used more in A/V work to shift tracks up to 59 milliseconds. (Echo type delays are found in the effects section described below.) The Attenuator component is a handy device that provides a range of cut/boost from –96dB to 12dB. The Phase Inverter is a simple on/off button for shifting the phase of a channel by 180 degrees.

The simplest way to build a mixer is to create a single channel that has all the components you want on it, then copy that channel and multiple-paste the number of channels desired. Each channel is pasted with the added components. A typical channel might have a pan pot above the fader, then the EQ section, then a dynamics section, then a couple of Aux sends. The nice thing about being able to build your own mixer is that you can build as many as you want and save them as Mixer files. The ideal situation is to have a mixer for each type of project you do. For example, you could build a mixer just for two-voice commercials that consists of two tracks for music (left and right), two tracks for stereo sound effects (L&R), and two tracks for the voices (both panned to the center). If you usually add compression and/or EQ to voice tracks, you could have the compressor and EQ added to that channel with typical settings already in place. So, next time you create a commercial with this mixer, EQ and dynamics processing will already be set. (This is very similar to DAWs that don’t let you create your own mixer but do let you save mixer settings.) And not only can you save mixers on MxTrax, but you can save mixer channels as well. This function can be used to store a mixer channel with EQ and dynamics preset for a particular person’s voice. When that person shows up to do some voice work, simply recall that channel and assign it to a track. It’s the equivalent of storing individual settings in a digital voice processor.

Making adjustments to mixer components is done with basic click and drag moves with the mouse. Many parameters can be set by two methods, either clicking the knob and moving the mouse left or right, or you can click the value display for that parameter adjacent to the knob and move the mouse up or down. Mixer channels can be grouped so that adjusting the fader on one will also move the fader on the other channels. However, grouping does not group other components. Changing EQ on one channel of a stereo pair requires making the same adjustment on the other channel. What is most appealing about working with this mixer is that all adjustments are made in real-time. This is how DAWs were meant to function, and MxTrax for DSP Factory does it well.