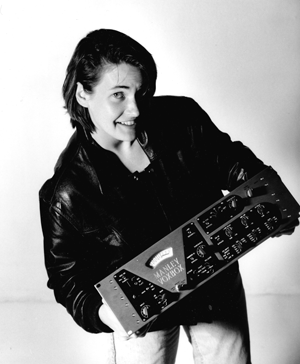 I usually work alone in my studio, and record voiceovers using a Lawson L47MP large-diaphragm tube condenser microphone. The Lawson goes into a Yamaha 02R console, and from there to both a Macintosh computer with a Korg 1212 I/O card, and to a Sony DAT recorder as a safety. The Korg card is connected to the Yamaha console digitally via an ADAT light pipe, and the DAT recorder gets its signal from the analog output of the console.

I like this setup, and it produces what I believed were good-sounding voice tracks. Then one day, not long ago, the Voxbox arrived and everything changed.

The first thing I noticed on opening the box was the unassuming spiral-bound owner’s manual. Unlike some, I enjoy looking through a manual before I fire up a new piece of gear. It helps me avoid potential pitfalls, and it also gives me a good indication of the manufacturer’s attention to quality and detail, or lack thereof.

The manual for the Voxbox was such a good read that I didn’t actually fire up the piece for an hour after removing it from the box! Besides describing the operation of the Voxbox, the manual is a good refresher course on sound engineering practices that are often forgotten today. For example, in the EQ section the manual reminds you to try cutting first rather than boosting. Good advice.

THE PREAMP IN USE

The first thing I noticed on playback was not additional warmth, as one might expect using an all-tube channel. Rather I noticed a quality of additional “air” in the vocal sound, and a marked increase in presence. The track sounded as if the talent was standing very close to me, speaking softly into my ear.

I flipped the switch on the Voxbox from BYPASS to COMPRESS 3:1, and I set the VU meter to show me the gain reduction. As I do, I’m thinking that the fixed 3:1 ratio may be too low, as I usually compress at about 4:1 with a high threshold, so I really only hit the peaks but I hit them pretty hard.

With the THRESHOLD control set at about 11 o’clock so it kicked in only on the plosives, I then recorded a hard-sell spot that really pinned the input meter. The level of the resulting track was somewhat tamed, but the compression was inaudible. So far so good. Cranking up the THRESHOLD to 4 o’clock, I recorded the same spot. The result was a thicker sound that held the VU meters steady, but there was still no pumping, and no increase in noise. Just a very in-your-face sound, yet uncolored.

Changing the ATTACK and RELEASE controls yielded the results I expected. While I preferred both to be set to MED FAST for VO tracks, I found that setting them to SLOW gave a good impression of an engineer riding a fader. This was useful to smooth out rowdy music beds, although you’d want a second Voxbox to process stereo (hint, hint, I want another one of these, please).

I was able to borrow both an ART PRO MPA tube mic pre and a Bellari tube mic pre to compare them with the Voxbox. Both the ART and the Bellari are competent voice processors that cost much less than the Voxbox. They both imparted a tube warmth to voiceovers, but they colored the sound of the tracks. On the other hand, the Voxbox sounded far more transparent. It did not really give the same kind of warmth, but it also didn’t color the tone of the mic. It seemed to have a more natural, open sound.

Altogether I tested the Voxbox with a few different microphones, including the aforementioned Lawson. The Lawson microphone is wonderful—you can record two tin cans and a string with the Lawson and get a good track. But how would the Voxbox handle other mics that are a bit less wonderful?

My beat-up old AKG 414 condenser mic was my first “pro” mic, but it has a nasty hump around 3.5kHz that makes me crazy. In the past, I’ve tried to EQ the hump away with limited success. Voice talent ends up sounding either harsh or, with midrange EQ, hollow. It’s particularly brutal with women’s voices.

So I connected the AKG 414 to the Voxbox to give the EQ and DE-ESSER sections a workout. Just to make life interesting, I invited a female voice artist to come over and re-record a track we’d done earlier on my pre-Voxbox rig.

Using the MID DIP, I cut about 4dB at 3K, and I added just a bit of 16K using the HIGH PEAK. I set the DE-ESSER frequency to 6K and experimented with the THRESHOLD until the VU meter showed just a couple of dB of de-essing. Finally, I added a little less than one dB of low end at 300Hz to give her voice some meat.

The resulting track was better than the original done on the Lawson/02R setup. Her voice had more “air” and a nice silky sheen on the top end, but was not at all harsh or gritty. When she commented on how much smoother she sounded and asked what I’d done differently, I just pointed to the Voxbox. Her response was “That looks amazing... what is it?” It’s my secret weapon, that’s what it is.

The sound of the Voxbox’s EQ section is remarkable. Although I wondered if I could live with a cut-only midrange control, I ultimately found it more useful than the traditional boost and cut mid EQ. As a bonus, the cut-only midrange makes you think about how and when you use it, which usually results in a better sound.

During the evaluation period I tested the Voxbox with more than just vocals. I recorded a guitarist with a Strat and a full pedal board, using the INSTRUMENT input on the front of the Voxbox. The guitar player began by telling me how much he hated his sound when plugged directly into a console. He really wanted me to mic up his amp. I politely refused.

Manley recommends against using the Voxbox’s compressor with electric guitars that are plugged in directly, since compression lowers the impedance of the INSTRUMENT input and can cause a loss of highs. They suggest using the DE-ESSER in its LIMIT mode as a substitute for the compressor, or using an effects pedal between the guitar and the INSTRUMENT input. We opted for the latter approach.

We ended up with a smoking rhythm guitar track with a lot of punch, and the guitarist told me it was the first time he liked his sound recorded directly. We achieved similar good results with his lead tracks, and also with a bass track played on a G&L 5-string bass. Speaking of bass, although I feared for my studio monitors when the bassist hit the low 5th string, the Voxbox took it in stride and reproduced those low notes cleanly.

By now you’ve gathered that I rather like the Voxbox. In fact, I like it so much that I’ve behaved recklessly with it. One of my current projects is narration for a video, and I send the client audio tracks for approval as we progress.

On a whim, I recorded the last voiceover using the Voxbox and a Shure SM-57, burned the CD, and shipped it off. I later asked the client his opinion of the voice work—you guessed it. He loved it, said it sounded good, and told me to keep up the good work. I can do that. I will not claim that the 57 sounded as good as the Lawson, but I will say that the old 57 never sounded as good as it does through the Voxbox.

The Manley Voxbox is a well thought-out, well-built piece of audio equipment. Although it carries a hefty price tag, it’s a good value, especially if your livelihood depends on delivering excellent voice tracks to your clients. I looked hard to find something I didn’t like on this unit, but I’ve come up empty.

Like many of us, I have a fetish for really good audio gear. While I can’t always afford the best, there are times that I make whatever sacrifices are necessary to own an exceptional piece. With the Voxbox, this is clearly one of those times. My clients have commented on the improvement in my sound, as have other voice actors. I really have no choice here. I’m not returning this unit—I’m writing a check.

August 01, 2005 7971
by Steve Cunningham When Avid Technology, the parent company of Digidesign, acquired M-Audio last August for $80 million in cash (that’s right, eighty million), it was clear that they were buying more than a line of inexpensive...
Read More...
© 1988 - 2022 Radio And Production, LLC
Go to Top