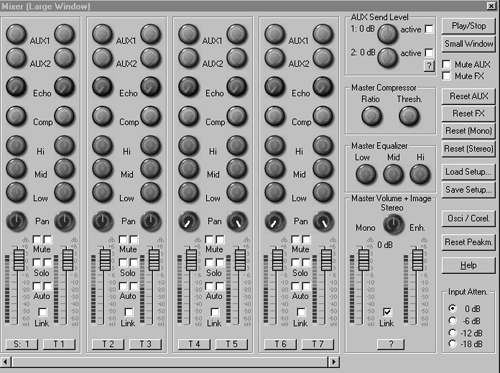 The Mixer Window accesses one of the coolest software-based mixers I’ve seen. Each track comes with its own fader, level indicator, and solo and mute functions. There are eight large knobs for each track. The first is the pan pot. The next three are the Low, Mid, and Hi EQ controls. A click-drag on any knob makes the adjustment. Right-click any EQ knob to fine tune the EQ frequency bands and bandwidths on this fully sweepable 3-band parametric equalizer with 20dB of cut/boost on each band!

Above the EQ knobs is the Compressor knob. Click-drag to adjust. Right-click to make adjustments and select other dynamics processing to be applied to that track including an expander and a noise gate. Above the Compressor knob is the Echo knob. Crank this to add delay to the track. Right-click to adjust the delay time (up to 2 seconds) and select delay types (single, feedback, and multi-tap).

Finally, at the top of each mixer channel are the two Auxiliary Send pots. When assigned to a second sound card’s outputs (or additional outputs on a multiple I/O card like DAL’s V8 or SEK'D's ARC44 and ARC88), these sends can be used like the sends on a conventional mixer, enabling access to external effects boxes, etc..

Click the Auto box to activate fader automation. Make adjustments in real-time during playback, then watch the faders move by themselves when played back again. Pan adjustments are also recorded. The mixer also includes a Master Compressor and Master EQ on the stereo mix. A Master Image knob adjusts the stereo mix from full mono to stereo and even to an “enhanced” stereo mode. Again, settings can be saved to a file and reloaded at any time.

Samplitude Studio allows track bouncing, but it’s done by writing the mix to a new Wave file which can then be pulled back into a project or used alone. Bouncing tracks may be necessary if a particular project is using too many real-time effects. When bounced, the effects are recorded to the Wave file thus freeing up DSP power for real-time effects on other tracks.

Under the Effects pull-down menu are several effects that can be applied to audio in the VIP window, to the actual Physical Audio file, or both. As mentioned, there is EQ, delay, and dynamics processing available on the mixer. But in the event you don’t want to add these effects to an entire track, they can also be applied to individual Objects or marked areas on the VIP screen.

You’ll find reverbs with the Room Simulator. Room Simulator uses the impulse response of a room and applies this information to the selected audio. It’s possible to record your own impulse response, from a local theater for example, and apply this impulse response to an audio file, making it sound as though it were recorded in that theater. This is not a real-time effect and requires some processing time. The shorter the audio segment, the quicker the process. Again, the type of system you’re using will have a great deal to do with the time this type of function takes. With our P200, it wasn’t unusual to wait nearly ten seconds for a sixty second voice track to get its reverb. For this reason, those Auxiliary Sends on the mixer are perfect for sending audio to an external reverb box through a second sound card.

The Normalize function mentioned earlier raises the overall level of the selected Object or Physical Audio file to just under clipping. There’s a Declipping function that does a pretty good job on those occasional clips, but don’t expect it to restore a badly clipped audio file. Samplitude Studio’s Time Stretch effect works very well and surprisingly fast. It works non-destructively on Objects in a VIP or destructively on the original Physical Audio file. Resampling and Pitch Shifting are also found in the Time Stretch dialogue box.

There’s a Convolution effect that basically “morphs” two files together, providing some unusual effects depending upon the files being morphed. The Noise Reduction effect is a very handy tool for getting rid of tape hiss, hums, and other consistent noises. The 2-step process calls for marking an area of the audio that has only the unwanted noise, then applying the Noise Reduction effect to the part of the audio that needs cleaning up. The Draw Filter/Spectrum effect is pretty cool. This is an FFT spectrum analyzer and filter. Without getting into the technical jargon, this effect lets you see the frequency response curve of the selected audio, AND let’s you DRAW a new frequency response curve. It’s EQ with a big brush! This is a very nice assortment of effects, and it’s even nicer to find them all as part of the program and not plug-ins that you have to buy!

Unlike many DAWs, Samplitude Studio will do real-time sampling rate conversion upon playback. This means files of different sampling rates can be used in the same project. Also, files can be imported or exported, not only in the standard Wave format, but in Apple AIFF format and MPEG Layer 2, also. If you have a SCSI CD ROM, Samplitude Studio can copy data from an audio CD directly to the hard drive, making the audio available as a Wave file ready to import into a project. Play AVI files while you work on the audio. Sync Samplitude to external devices via SMPTE or MIDI Time Code with Samplitude as the master or slave.

And there’s much more to the Samplitude family. We mentioned Samplitude Pro at the beginning. There’s also Samplitude Multimedia, a 4-track version with basic editing and effects for a mere $69. Samplitude Studio V8 ($999) is designed for use with DAL’s V8 card. There’s the Red Roaster line of audio CD mastering and authoring programs. Samplitools IR ($99) is a collection of Lexicon 480L and TC M-5000 impulse responses. SEK’D also offers Samplitude in hardware/software packages bundled with various I/O and interface cards on the market.

It’s amazing how much a person can do with a personal computer these days. Samplitude Studio provides the platform to do serious multitrack projects of any size. It provides an interface that is not only intuitive, but very fast once you’re up and running. And with the dropping prices and rising power of PCs, the budget conscious studio designer has got to be in heaven.

It’s difficult to find shortcomings with Samplitude Studio without getting very picky. An undo function when editing in the Physical Audio Data mode would at least put one at ease. Perhaps it could be turned on and off by the user. The scrub function is your basic left/right drag of the mouse, and it’s not as responsive as scrubbing in RAM. But ample zoom functions make accurate waveform editing by sight easy enough. The learning curve is a bit lengthy, and a first glance at the main screen, menus and toolbars can be a bit intimidating. The DJ down the hall might choose to avoid Samplitude Studio when he needs to do a quick voice-over, but the production power user of the ’90s will enjoy the seemingly limitless capabilities of Samplitude Studio.

Hohner Midia, with offices in Santa Rosa, CA and Schwabbach, Germany, has been the exclusive world wide publisher of SEK'D products such as Samplitude. Hohner Midia and SEK'D recently merged, and the new company now operates as SEK'D America.

May 01, 1990 6360
The digital revolution continues to churn out audio processors of one kind or another as fast as a night club changes copy. Every time we turn around, it seems there's yet another interesting piece of equipment out there to...
Read More...
© 1988 - 2022 Radio And Production, LLC
Go to Top