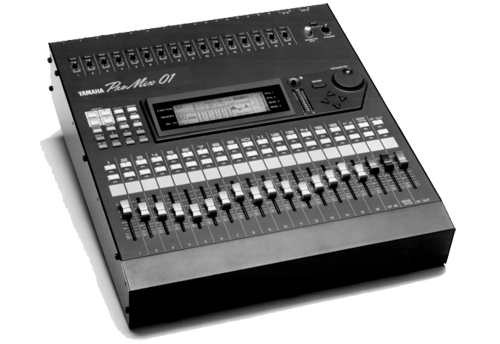 Forget your every notion of what a "mixer" is. The rapid pace of technology is changing that forever. Some high dollar "recording studio" consoles have already realized the power of combining computer technology with mixing consoles. Now, that same technology is available in a less grand model, and at an affordable price that borders on unbelievable.

The ProMix 01 is an 18 x 2 mixer. 16 of the inputs are mono, and one is stereo. All inputs are analog. But once the ProMix gets the analog audio, it converts it to digital and keeps it there for all aspects of "mixing" including levels, panning, and EQ. The ProMix takes the digital processing even further and provides digital dynamics processing as well as digital multi-effects. All of this processing is done with incredible clarity and ease and provides a stereo mix--complete with reverbs, EQ, delays, flanges, compression, limiting, and more--as a balanced XLR analog output or a digital output ready for the digital input of your DAT deck or other digital mastering/storage system.

Sounds pretty impressive so far, right? Well, what's even more impressive is that the ProMix 01 has a list price of only $1,999. And we haven't even mentioned the motorized faders yet!

All connections are made at the back panel. As mentioned, there are sixteen mono inputs. The first eight are balanced XLRs. Inputs 9 through 16 are balanced ¼-inch inputs. Phantom power is available on the XLR inputs and is turned on and off on all channels simultaneously with the Phantom Master switch. The nominal input level of all 16 mono inputs is adjustable between 60dB and +4db thus accommodating mic and line level inputs.

The ST IN stereo input is unbalanced and uses ¼-inch phone jacks with a +4dB nominal input level. This can be used for any line-level input such as a CD player, DAT deck, external effects returns, etc.. The stereo input works in conjunction with another stereo input, the 2TR IN. The 2TR IN utilizes RCA phono jacks and feeds the input signal to the CUE/2TR IN switch on the top panel (rather than to a fader like the ST IN). When nothing is connected to the ST IN jacks, the 2TR IN signals are fed to the stereo input channels thereby allowing the signal to be manipulated like the other channels with EQ, effects, etc..

The stereo MONITOR OUT uses unbalanced ¼-inch phone jacks and can be used to feed a monitor amp. This is the same signal sent to the headphone jack. The STEREO OUT is balanced XLR and outputs the main stereo signals. The REC OUT is another set of main stereo signal outputs, but they use RCA phono jacks. Either STEREO OUT or REC OUT can be fed to recorders. As mentioned, the ProMix provides a digital out as well. This is a coaxial output using an RCA phono jack and outputs the main stereo signal in the S/PDIF format. Rounding out the rear panel are MIDI IN/OUT connectors and the power of/off switch.

The top panel provides a simple, user-friendly interface. At the top is a row of PAD switches for each of the sixteen inputs which attenuates input signals by 20dB when pressed. Below each PAD switch is a GAIN control for setting input channel signal levels. At the top right of the panel are the MONITOR OUT and PHONES level controls as well as the CUE/2TR IN switch which switches the monitor and headphone outputs between the 2TR IN signal and the CUE signal.