We stepped away from audio processors this month to take a look at a pretty hot CD player, but before we go on with this test drive, let's set a couple of things straight: 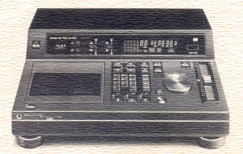 1. If you're an "audiophile", you won't like this review. We're not going to spend a lot of space talking about how Technics' Class AA circuitry isolates voltage control from the current supply to create class A conditions of amplification while avoiding the influence of load impedance on voltage amp operation. (Huh?...)

2. When you consider that FM stations roll off frequencies above 15kHz or so, it doesn't make much sense to talk about the SL-P1200's frequency response of 4 to 20kHz and signal to noise ratio of an incredible 106db, so we won't. Besides, who can hear a 4 cycle tone? With a big enough woofer, it might mess up your hair, but that's it.

3. The SL-P1200 incorporates a new microprocessor that controls the speed of a new linear motor that controls the position of the pickup. This microprocessor speeds up the laser pickup as it's headed towards its destination and slows it down before it gets there to avoid the shock of a sudden stop at the destination track. This should make little laser pickup microbes happy, but we won't get into this aspect of the CD player either.

Now, on with a test drive for radio production people, or better stated, "What do the buttons do?"

A nice feature to look for on a CD player is its ability to cue to the start of the audio on a track, not just the track. The SL-P1200 lets you do both. With the "auto cue" switch on, the unit will cue up to the first note on the track, thus giving you instant audio when you hit "play", not the varying delay found on many machines.

Technics has incorporated a couple of functions that emulate a turntable. If you do mixes, as in "club mixes", you'll like the rocker control buttons. During play, hit one and the music will delay for 1/10 of a second. Hit the other and it will advance 1/10 of a second. It's the equivalent of speeding up or slowing down a turntable with your hand.

The other turntable-like function is the 2-speed search dial. If you're used to spinning a record at about 200 rpm with your finger to get to a certain point on the record, this dial will do it just as well without putting your stylus into a frenzy. The two speeds let you cue backward or forward in 1/10 of a second increments covering 1 second per rotation of the dial in slow mode, or 30 seconds per rotation in fast mode.

A popular function of the SL-P1200 is the pitch control. A long-stroke fader on the right side of the unit gives you a range of plus or minus 8%. It works just like those on a turntable.
The digital display offers the usual track and index numbers, elapsed time, and remaining time (to the 10th of a second) for each cut or for the entire disc, and an output level indicator that shows attenuation from 0 to -12db (controllable by the remote control).

The "Music Matrix" display shows you how many tracks are on the disc, illuminates programmed tracks, and flashes the current track in play. Like those on most CD players, this matrix only shows a maximum of 20 tracks; not much use on a sound effects CD with 99 tracks.

Even after 26 years when I wrote this review, I can still remember how great it felt to get my hands on this player. Would be cool to hear thoughts from anyone that might be using one of these today.

An incredible cd player
I own this incredible machine for 6 month... a purchase I can't regret ! Its look is fatastic, as vintage as original (and finally not so old that you can imagine), very well built, solid as a rock... For a radio station that still uses cd (in 2019...), it's the best player. I personally use this SL-P1200 as a cd player in a stereo system. All my friends are surprised by its powerful look, and by the sound of the machine. About this point, I have a better Technics player (one of the 2 best ones in Technics production), a SL-PS900 that play the music perfectly (depp stage, bass with rich details, natural tone, limitless dynamic etc...). The SL-P1200 sounds good, but with a metallic trebles tendancy.

I would love to have this player in my stereo system! Thanks for your comments, Bruno.

Thanks a lot Jerry... I'm sorry for all my spelling mistakes (I'm french)... Yes, this machine looks fantastic. It's certainly the most beautiful cd player ever built !

Your English is way better than my French!
(edit: fixed my spelling. lol..)