I never tire of telling you, dear reader, that the installation process for a software product is simple and quick, which is precisely what I do tell you when it truly is both of those things. And believe me, when the process is something other than simple and quick I’ll be the first to unleash a well-deserved rant right here in print. However, the P&M series of plugs is about the simplest and quickest install I can remember doing, given that the forty plugs weigh in at about a half-gigabyte of disk space. While the instructions tell you to fire up your favorite editor, install an instance of a plug-in, then fill in a serial number in a box that will appear, I can tell you from experience that’s the hard way.

When you unpack the .dmg or .zip file on your computer, you’ll see three folders appear in a window. Open the first one, labeled “1) Install Your Software”, and just install the dang things. Then open the second folder, titled “2) Authorize Your Software” and run the enclosed installer (where you will need to enter a serial number from the confirmation email you got when you bought the product), and you’re done. The third folder contains the documentation in PDF format, which you can read at your leisure.

When I say you’re done, you’re really done. There’s no additional registration information, no additional auths to confirm, and nothing else. I installed the VST plugs first and authorized them as above. I then installed another format of the same plugs, and those were automatically authorized as well. It’s brilliant and, for a change, it just works. Here’s the best part: P&M allows up to five computers to be authorized from a single unique serial number. Yup, that’s five computers. So I’ve got these things on a Mac laptop, a Win laptop, a Mac desktop, and a Win desktop with one install left over. I like that a great deal.

While we’re on the subject of installs, you should also know that all the P&M plugs will install and run on any Win box with a P4 or Athlon XP running at 2GHz or better and a gigabyte of RAM. Since AMD introduced the last of the Athlon processors in 2004, I’d say the requirements are more than modest. Things are similar on the Mac platform, with operating systems support that goes back to 10.5.8 (sorry, no PPC Mac support) and forward to 10.7 Lion. I evaluated some of the plugs on a 10.8 Mountain Lion machine, and they behaved properly despite the lack of “official” support. All formats are supported as well, including VST 32- and 64-bit for Windows, AU and VST for Mac, and Pro Tools AAX and RTAS for both platforms. 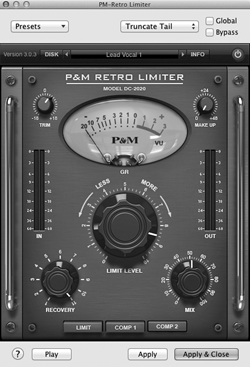 Right out of the chute I had to check out the Retro Limiter. This is a simple limiter that will do both limiting and compression, depending on the setting of the three buttons across the bottom of the unit. I punched the Limit button to start. In the upper left is a Trim knob, which governs the gain of the incoming audio from -18dB to +18dB, while the top right knob handles the Make Up gain at the output from 0dB to +48dB. Of course, the big knob in the center controls the Limit Level, which goes from 0 to 10. It’s tough to determine how the scale maps to volume, but at 0 there’s no limiting whatever, while at 10 it definitely pins the Gain Reduction VU meter.

The Recovery knob in the lower left essentially controls the release time, from 1 to 11, but I cannot tell what units of time those represent. Suffice it to say that at a setting of 1, the release appears to be in the 10-20 msec range, while setting it to 11 feels like a little less than a second for the gain reduction to return to null. Two LED meters on either side of the knob give a good idea of the In and Out levels, and seem properly calibrated.

In the lower right is an unusual Mix knob, which allows the limited signal to be mixed with the dry signal, which suggested some interesting possibilities for generating in-your-face voice over tracks. In fact, the Mix knob proved to be highly useful, and allowed me to create a nearly-slammed voice over track, and mix that with the un-limited track. The results felt like they had most of the dynamics of the original but felt louder and more present at the same time, without actually being louder. I like that a lot, and while I know you can create the same effect with multiple channels in a mixer, it’s very handy in a two-track editor like Twisted Wave or Sound Forge. So how does it sound? It’s a nicely uncolored limiter, so long as you don’t go crazy with the input Trim control. If you advance that one it will turn into a harsh beast quickly, since there’s more than enough gain available to “overdrive” the rest of the plug-in. But if one doesn’t abuse the input gain, one gets a nicely trimmed track in which the original is still present.

The Comp 1 and Comp 2 buttons essentially change the knee of the limiter from sharp to softer, but never really soft like a compressor. While interesting, these settings were much harsher than the actual compressor plugs, and I probably wouldn’t use the Limiter in that mode. 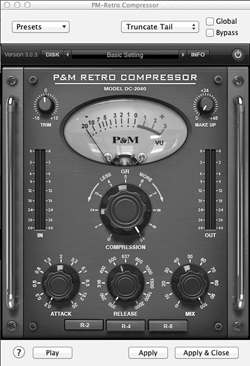 Next came the Retro Compressor, whose controls are far more conventional and calibrated in familiar units. As with the limiter, there’s Trim, Make Up, Compression, Attack, Release, and Mix. The curious thing is the three buttons at the bottom which, emulating a Fairchild, are marked R-2, R-4, and R-8. The manual says that they increase the Release duration, so I tested them out. No, they don’t seem to affect the Release time, but they definitely appear to increase the Compression Ratio (which is actually how the Fairchild worked; there was no Ratio control, just three buttons to change the ratio from a bit of compression to squashed).

Like the Retro Limiter, the controls give you enough rope to hang yourself if you abuse them, but used gently they produce a clean and uncolored sound compared to the bypassed track. Does it sound retro? I’m not sure about that, although someone went to some length to make the compressor respond like an old-school optical compressor with the little incandescent bulb and the photo-resistor. Used properly it is unobtrusive, and the response could be called musical. It’s certainly not digital-sounding, and it seems a good workmanlike processor.

August 01, 2013 5752
by Steve Cunningham We’ve been recording, editing, and mixing digital audio for long enough that most of us long ago settled on a favorite program (or perhaps two of them) for their work, and generally we tend to stick with it....
Read More...
© 1988 - 2022 Radio And Production, LLC
Go to Top