It’s definitely football season again at USC, and as it happens the field where the team practices is approximately 150 yards from the classroom where I teach on Wednesdays from 4 to 6 PM. If you are a college football fan, you know that practice includes simulating the crowd noise and marching band music that occurs in a real game. What better test for Mikey then to record the crowd noises that are played back in excess of 120 dB?

So I did exactly that. I set the sensitivity switch to its lowest level, walked across the street, and held it up. I couldn’t hear myself think. But Mikey successfully captured several minutes of the prerecorded crowd noise with good fidelity and no distortion.

Later that evening after my last class, I attended a student cello recital that was held in a small hall. This time I set the sensitivity switch to its most sensitive position. At first I attempted to hold the iPod in my hand while recording. At the intermission I walked outside the hall and attempted to listen to what I’d recorded by holding the back of Mikey up to my ear so I could hear the speaker.

I’d recorded the music all right, but evidently Mikey has a strong low-frequency response because the handling noise was unacceptable.

For the second half of the recital, I put Mikey on a table near the stage. I experimented a bit with the position of the swivel. The included user guide, which is small in size and short in length like most consumer products, suggested several positions for the swivel. I got the best results by swiveling the head backward from the face of the iPod, and setting the iPod on the table so that the microphone element faced directly forward and away from the iPod.

After the recital it was time to get the audio off the iPod, and into my laptop for editing. The simplest way of doing that is to simply connect the iPod to the computer, and allow Apple’s iTunes to start up. When it does, iTunes will notice that you have voice memos, and will ask if you’d like to transfer them from the iPod into the computer. You of course are supposed to click the OK button.

But those of you who have an iPod, and use iTunes on a PC or a Mac, may see a problem here. The problem is that if iTunes is set to automatically sync your iPod, and you are plugged into a computer that doesn’t contain your music library, iTunes will happily replace all music podcasts or any other audio you may have on your iPod with whatever is in the current iTunes library. 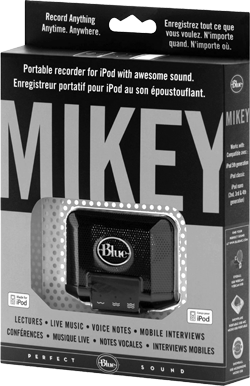 Those of us who use iPods and iTunes regularly solve this problem by turning off the automatic sync feature in iTunes, preferring to manually move our audio content from iTunes into the iPod.

Unfortunately, with automatic sync turned off, the dialog box that asks about your voice memos never appears. Further, finding that voice memos playlist in my iPod was impossible until I had performed one automatic sync operation.

The bottom line is this: if your iTunes library resides on a computer other than the one you use to cut audio, you will first have to perform an automatic sync on your iTunes computer in order to be able to find the voice memos playlist for manual syncing on your editing computer. It’s a small “gotcha,” but it provided a little extra frustration that I didn’t really need.

As I edited the recital recording, I was pleasantly surprised at the quality I heard through a good set of headphones. Mikey’s frequency response was pleasant if not totally accurate. The low midrange performance was solid, and the high end was clean but not at all bright. There wasn’t as much high midrange as I would’ve liked to have heard, but it was still surprisingly good given the price point. Based on what I did hear, I suspect that the condenser elements in Mikey are electrets, since they exhibit that slightly “scooped” frequency response.

The stereo separation was evident, although just barely. But then again, the two elements are separated by about 1 1/2 inches, so I didn’t expect much of that.

I subsequently recorded a fair amount of voiceover and simple conversation, always using the medium sensitivity setting. The results were quite good, and I wouldn’t be at all afraid to use them in broadcast. The only EQ I used was a gentle high pass filter set around 200 Hz to tame some of the low mid range rumble. I also experimented in a very quiet voice over booth to evaluate Mikey’s self noise. While there was some, it was well below -60 dB, and I attribute much of it to the hard drive noise from the iPod itself. One could of course always use an iPod nano, which will make no noise since it uses flash memory instead of a hard disk.

Unlike my last foray into iPod recording, my experience with Mikey was quite good. While I’m unlikely to sell my Fostex field recorder and condenser mics, Mikey is certainly good enough for actualities and even VO demos. I’m pretty happy with the prospect of being able to travel with a recording rig that fits in my shirt pocket. Steve sez check it out.

Mikey from Blue Microphones carries as US suggested retail price of $79.99, and is available direct from Blue or thorough distribution. For more information worldwide, visit www.bluemic.com.

May 01, 1995 20579
by Jerry Vigil Over the years, I've had the wonderful opportunity to Test Drive a number of workstations. Some were big and bulky, others more compact. Some required fairly complex installation procedures, others were a piece of...
Read More...
© 1988 - 2022 Radio And Production, LLC
Go to Top