But all that’s new in Forge Pro 10 is not menus and toolbars. Forge Pro 10 now has Event-based editing, which represents a major enhancement to audio editing for Forge. In short, a new Event tool lets you edit multiple audio events in a single data window, making it easier to edit edges and fades and lay out tracks for CD burning. In Forge Pro 10, any time you cut, copy, or paste a selection, you create an event. Activating the Event tool makes all these events visible, movable, trimmable, and mixable, all using the Event tool. 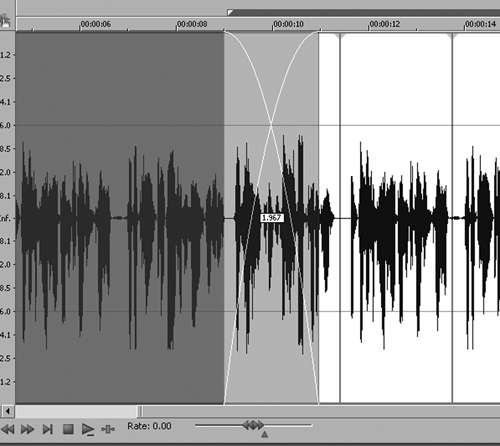 For example, as you can see in the screen capture, moving and audio event so that it overlaps another audio area creates an automatic crossfade. Once created, audio events can be split by first selecting the event, then placing the cursor where the split is to occur. Pressing the letter S splits the one event into two. Dragging and dropping audio from anywhere -- from other projects, from the Sound Forge Explorer window, or from Windows Explorer -- onto existing audio causes the two audio files to mix, but the standard Mix/Replace dialog box doesn’t appear.

By placing the cursor over the edge of an event, it will change to a Trim tool allowing you to trim the head or tail of an event. You can also slip an event by holding Alt while dragging an event. This causes the underlying audio to shift in time, but the event itself does not move. You can even slip and trim simultaneously, whereby as you drag the edge of the event, the underlying audio moves with the event edge but the other end of the event does not move. These are well understood edit moves in the world of video, but you rarely find this capability in most audio editors. Again, the concept of event editing is not revolutionary, and is available in its basic form in other editors. But this represents a major enhancement to Sound Forge.

There are other enhancements to the editing functions in Forge Pro 10 as well. For one, it will now allow you to burn disc-at-once CDs, rather than only track-at-once. This is a good thing, although in some ways it simply brings Forge Pro 10 current with its competitors. The same can be said for its window layout management tools. Since window docks now float on the screen, it makes sense that Forge Pro 10 allows you to save and recall window layouts. In addition, grid lines, which have been available for some time, can now he applied to a selected region of audio, and you can specify the number of lines that will appear in that selection. I found this particularly useful for editing music, where setting up the grid lines to bars or beats, and then enabling snapping, made it a lot easier to get the two music pieces to segue together nicely and in time.

Speaking of which, the time stretch and pitch shift plug-in that’s included in Forge Pro 10 comes from the folks at iZotope. As I’ve mentioned in several other reviews, for my money nobody does better time stretch that iZotope. The combination of their time stretch algorithms, the customizable grid lines, and event-based editing make Forge Pro 10 a beat mapping and beat matching monster. I didn’t really have time to get deeply into beat matching music, which can be daunting unless of course you’re Dave Foxx, but it seemed to me that Forge Pro 10 had all the necessary tools to let a piker like me make a reasonably good job of it.

In this review I’ve focused only on the things that are new in Forge Pro 10. But make no mistake -- the other features and extras that Forge has always had are still there. All the plug-ins we’ve come to know and love in the package are still in the package. Many of them, notably the iZotope Mastering bundle, have been upgraded to a new version. That bundle, which includes a Mastering EQ, Limiter, Reverb and Compressor, is even sweeter sounding than before. Even Sony’s Noise Reduction plug-in, one of the better NR plugs out there, has also been upgraded to a new version. Also included is Sony’s CD Architect, a competent CD mastering tool which is basically being upstaged by the editing enhancements in Forge Pro 10. Still, if you don’t have it it’s worth having.

TO UPGRADE OR NOT?

At last it’s time to consider the age-old question: should I upgrade my Sound Forge or not? As always, the answer depends upon what version you’re using today. If you’re still making do with version 8, or heaven forbid an earlier version, then it’s high time to grab your wallet and spend the money. If you buy the downloadable upgrade version today or in the very near future, you’ll get it cheap enough... mine came in at about $140 US.

If you’ve already upgraded to version 9 and are wondering whether you should take the extra step, all I can say to you is this: I still have version 9 on my computer. During the course of this evaluation I went back and forth between the two versions, comparing and contrasting, trying things this way and that way. Now I don’t wanna go back.

In fact, what I wish now is that Sony had added these enhancements into version 9, where they should have been in the first place. But that’s woulda shoulda coulda. I guess I’ll leave version 9 on my machine for a while, but probably not for very long. For me, it was money well spent. Steve sez check it out.

Sony’s Sound Forge Pro 10 is available now, and carries a suggested retail price of $274.95 for the downloadable version in the US. Downloadable upgrades start at $134.95. For more information worldwide, visit www.sonycreativesoftware.com.

September 01, 2008 7078
By Steve Cunningham I know I’ve mentioned this several times in previous months, but I’m still in search of alternatives to Waves’ plug-ins and their annual upgrade program fee (cleverly referred to as WUP, or Waves Update...
Read More...
© 1988 - 2022 Radio And Production, LLC
Go to Top