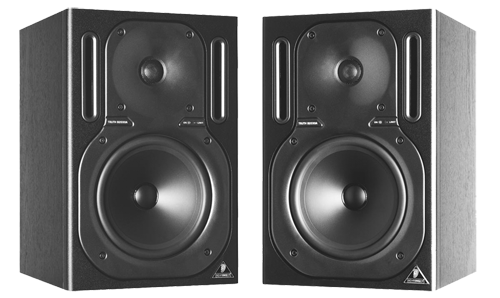 The Behringer B2030A is a ported, active two-way nearfield system, with a 6.75-inch bass/mid-range driver teamed with a 0.75-inch tweeter. The B2030A has a 75-watt amplifier driving the bass/mid-range unit plus a 35-watt amp powering the soft-domed tweeter. Both drivers are set into a molded baffle that incorporates a tweeter wave guide to control directivity, and both drivers are magnetically shielded for use near video monitors.

These speakers are built to hit a price-point, and are constructed from plastic-laminated MDF (a high-density particle board), though this is actually a good thing because of its density and self-damping properties. Cherry-wood veneer it ain’t, but the overall impression is clean and good-looking. The bass/mid-range driver consists of a polypropylene cone with roll surround mounted in a cast aluminum chassis. The bass ports are separate slot-shaped molded inserts set into the baffle on either side of the tweeter.

There’s an active crossover set at 2kHz, and the speakers are also designed to be used with or without a subwoofer. Separate high- and low-frequency limiters protect the drivers, and there’s an automatic standby mode that puts the amplifiers into sleep mode if the speakers aren’t used for more than five minutes. They wake up almost instantly on receiving an audio signal.

At the rear of the cabinet, which measures 12.5 x 8.4 x 8.33 inches, is a choice of XLR or TRS jack inputs, plus an AC power connector and a power switch — again on the back — which is inconvenient. These are all mounted on the amp chassis, with the AC and input connectors on the underside. Two LEDs are set into the front-panel baffle, one for power and a second showing the limiter has engaged. There are slide switches to adjust the frequency characteristics of the speaker to suit different installations. At the low end, the response can be flat, -2dB, -4dB, or -6dB, which the manual says is to accommodate a subwoofer. A second switch compensates for boundary effects, while at the high end, the switch positions are +2dB, flat, -2dB, or -4dB to suit the response of your room, but the manual doesn’t say what frequencies are affected.

The B2030A’s reported frequency response is 50Hz to 21kHz. However, no decibel limits are given, so this is meaningless. Where size does matter is in sound level, and the B2030As can generate up to 113dB per pair at one watt and one meter. Yup, they’re loud.

With all the EQ switches set flat, my first impression was that the monitors sounded slightly harsh. This situation improved noticeably when I dropped the tweeter level by 2dB, so it is important to adjust the EQ settings to match your room and monitor positions. Once that was set, the speakers delivered a reasonable performance given their budget price. I found that the subjective depth of bass was less than I expected based on the specs, while the high-end sounded somewhat forward and in-your-face.

The B2030As do not have the clarity or openness of the other two monitors I auditioned, nor the sometimes-painful level of detail of my NS-10s. As a result, they are the least likely to become replacements. At least with the Yamahas I could always hear the balances between the voiceover, the music bed, and the production elements clearly enough to stay out of trouble. The B2030As seem to make things sound good, but not accurate.

Considering their price, the B2030As offer good value, and can be made to perform well provided that you’re willing to fool with their placement and experiment with the EQ switch settings. They deliver plenty of level in a nearfield environment, unless of course you feel like you have to monitor at Spinal Tap volumes. For a secondary pair of speakers they’re great, but they’re not replacements for the NS-10s.

The Behringer B2030As carry a suggested list price of $339.00US per pair (prices may vary in other parts of the world). US street price is around $280. For more information, visit www.behringer.com in the US, or www.behringer.de elsewhere.

While none of these speakers is suitable for mixing bass-heavy hip-hop, the JBLs were the best five-and-a-quarter woofs in this group. They’re also the most expensive by a factor of two. For the $600 that the JBLs cost on the street, I could go with M-audio’s 8" BX8s, but I wanted to keep the woofers at like sizes for fairness.

I’m just impressed that there are good-sounding active nearfields available at these prices — as I recall my Auratones were not that much less than are the B2030As. Nevertheless, the search continues... for now...

May 01, 2006 12147
by Craig Jackman Adobe Audition, grown from its roots as Cool Edit and Cool Edit Pro, has become one of the most trusted digital audio workstations in radio production. Combining a wide user base with an exceedingly generous...
Read More...
© 1988 - 2022 Radio And Production, LLC
Go to Top